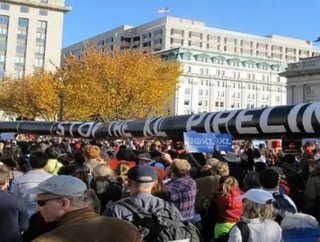 The Obama administration has decided it will not permit the controversial construction of the Keystone Xl oil pipeline from Canada before February 21...

The Obama administration has decided it will not permit the controversial construction of the Keystone Xl oil pipeline from Canada before February 21, according to insiders.

In light of the need for additional environmental reviews of the new proposed path of the pipeline through Nebraska, the government cannot and will not accelerate the permitting process—especially when there isn't even an alternate route option on the table.

"It's a fallacy to suggest that the president should sign into law something when there isn't even an alternate route identified in Nebraska and when the review process is" not yet done, White House spokesman Jay Carney said Tuesday. "There was an attempt to short-circuit the review process in a way that does not allow the kind of careful consideration of all the competing criteria here that needs to be done."

This doesn't mean, however, that the project has been called off altogether. The final decision will just be pushed until early 2013 after the election. However, the State Department's permitting process only applies to the portion of the pipeline that crosses an international border line, so sources tell The Huffington Post that TransCanada could build a shovel-ready southern portion of the pipeline between Oklahoma and Texas without more approvals.

TransCanada also says it is in fact working with Nebraska authorities to find an alternative route, but that kind of environmental approval could take another nine months to process once it's determined. Despite fierce opposition, backers of the project and TransCanada continue to indicate that they're not giving up.

"If it is rejected, TransCanada can come back and apply again," said Susan Casey-Lefkowitz, international program director at the Natural Resources Defense Council. "But the whole process starts again then."

Environmentalists fear the pipeline puts important aquifers at risk, while proponents argue for job creation and energy security. However, the dent the pipeline's construction could make in the economy or in America's large oil supply demands are somewhat vague. Is it really worth it? There are risks and valid arguments on both sides. The only sure thing for now is that the struggle will continue to run in circles.