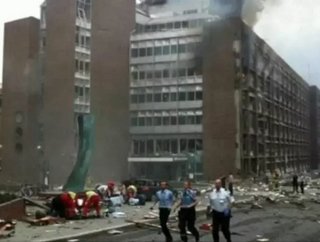 Norway is probably one of the last places that one would expect a terrorist bombing to take place. The country renowned for hosting the Nobel Peace Pri...

Norway is probably one of the last places that one would expect a terrorist bombing to take place.  The country renowned for hosting the Nobel Peace Prize and mediating numerous international conflicts has come under attack.  One or more bombs were detonated in the country’s capital, Oslo.  Government buildings in the city’s center were targeted, leaving at least two dead and setting the oil ministry offices on fire.

Several windows were blown out in the downtown district, and people were found lying in the streets bleeding after the mid-afternoon attack.  Prime Minister Jens Stoltenberg was not in his office during the time of the attack, however he may have been a prime target.  One explosion was detonated near the Prime Minister’s office and a second near the Norwegian Parliament.

Norway’s oil ministry has been evacuated following the explosion due to spreading fires in the offices.  Reports claim that the ministry may have been one of the targets in the attack.

U.S. officials said it was too soon to say for sure what caused the explosions or whether it was a terrorist attack.  Al Qaeda has reportedly threatened attacks in Europe; however, Norway is also a party to NATO’s aerial attacks on Libya, and Muammar Gaddafi has pledged to retaliate in Europe.

Norway’s Dagbladet cited police at the scene exclaiming that the oil and energy ministries were definite targets of the attack, and that at least one of the bombs was likely a car bomb.