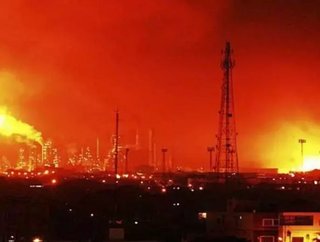 A huge explosion at Venezuela&#39;s largest oil refinery today left at least 26 people dead and 80 others injured&mdash;one of the country&#39;s deadl...

A huge explosion at Venezuela's largest oil refinery today left at least 26 people dead and 80 others injured—one of the country's deadliest disasters to ever hit one of its most important industries.

Health Minister Eugenia Sader reported that nine of the injured people were seriously hurt, while 77 suffered light injuries. A 10-year-old boy was killed and 17 of the other 26 killed were National Guard troops stationed nearby.

President Hugo Chavez has called for three days of mourning, while a “deep investigation” is launched to determine the cause of the explosion. Oil Minister Rafael Ramirez said a gas leak hit nine of the storage tanks in an explosion, severely damaging the nearby National Guard post and several homes. Firefighters did all that they could to contain the flames after the blast occurred around 1:15 a.m.

Ramirez said the oil company Petroleos de Venezuela SA will be able to restart operations in a matter of days and that the country has sufficient inventories of fuel to last ten days. With other refineries operating at full capacity, the disaster should not have major effects on the domestic market.

In terms of the impact on global crude of product pricing, the event is not likely to have an effect either. The real tragedy is the event itself, and the rate at which such events have been occurring around the world.

"This tragedy is probably the worst one the oil industry has had in many years. Accidents happen, of course, although the problem with PDVSA is the inordinate amount of accidents that have taken place during the last years," said Gustavo Coronel, an energy consultant and former executive of PDVSA, to the Associated Press.

For the last 29 years, workers have been warning PDVSA officials about problems they feared would lead to such an incident. The secretary general of large union of oil and natural gas industry workers Ivan Freites told the media that workers had been complaining about the problems for years.

"We warned that something was going to happen, a catastrophic event," Freites told the Associated Press.