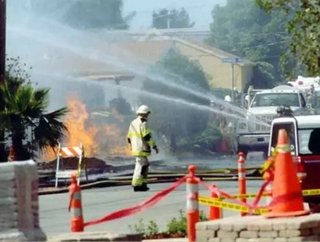 A condominium complex in Cupertino, California went up in flames after a leaky gas line exploded Thursday. No one was injured, but the condo complex i...

A condominium complex in Cupertino, California went up in flames after a leaky gas line exploded Thursday.  No one was injured, but the condo complex is completely destroyed.  Incidences like this are becoming a more common occurrence for Pacific Gas and Electric (PG&E), and the company has been scrutinized for its declining safety record.  PG&E now faces federal investigation by the National Transportation Safety Board.

Upon further investigation of the 2-inch plastic distribution pipe that fed smaller gas lines running into and around the condo, PG&E workers found a total of seven leaks.  It took nearly an hour and a half for PG&E crews to cut the gas flow to the condo.  The explosion reportedly took place just 15 minutes after the property owner left for lunch.

Just one day prior to the explosion, PG&E was publicly criticized by the National Transportation Safety Board in regard for its response to a similar San Bruno blast last year that killed eight people, and a 2008 explosion in Rancho Cordova that killed an elderly woman.  The regulators claim that PG&E took excessive time in both situations to respond and turn off the gas.  Which seems to have been the case again with this latest explosion.

"We are going to look at any commonalities this may have had with other investigations," National Transportation Safety Board spokeswoman Kelly Nantel says, "and will take any appropriate follow-up action. Given our recent experience with investigating accidents in California, we think this is an appropriate level of involvement."

Although PG&E workers arrived at the scene of the explosion just thirty minutes after the blast was reported, it took an additional hour and a half for them to shut the gas off according to company officials.  Though firefighters were quick to subdue most flames, those nearby the gas leaks continued to burn until the gas lines were cut off.  PG&E had to dig with a backhoe in three places before finally finding the gas line and pinching it off.  The company did not have a nearby central shutoff valve to stop flows more rapidly.  This was one of the main concerns expressed by the National Transportation Safety Board a year ago in the San Bruno explosion.

PG&E officials contacted condominium owner Lynn Tsui to claim responsibility for the explosion, stating that it was entirely PG&E’s fault.

PG&E spokesman David Eisenhauer says, "We will investigate this and take corrective actions," he said. "We are going to turn every stone to see what we can determine what happened here."

PG&E executive vice president for gas operations Nick Stavropoulos says, "We are thankful nobody was hurt. We will provide any assistance we can to the residents. We will get to the bottom of this as quickly as possible and take any and all necessary corrective actions."