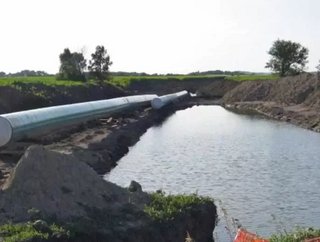 The United States of America is in trouble… big time.  And while the brunt of the damage is coming from a failed (and some would argue, criminal) banking and monetary system, an inconsistent and confused energy policy also tops the list of reasons a once admired nation suddenly looks as if it’s been caught with its pants down.  Joining in chants of “hope and change,” millions of Americans elected leaders they thought would represent their best interests.  Instead, petty bickering, inflated egos (not to mention bank accounts), and a very real neglect for the working class families the country was built upon has prevailed.  With a downgraded credit rating, an unemployment rate teetering around 10 percent, and prices at the pump reaching an all time high, what’s a nation to do?  How about build another oil pipeline?

The Keystone XL pipeline is a proposed $7 billion project that would link oil sands operations in Alberta, Canada to American refineries in Texas.  The 1,700-mile-long pipe would create 120,000 jobs (20,000 direct and 100,000 indirect) and transport 700,000 barrels of oil per day.  The project is being spearheaded by Canadian oil company TransCanada.

However, while the project certainly looks good on paper economically, there are some other factors to consider.  First off, 700,000 barrels of oil per day may seem like a lot, but Americans are currently using upward of around 20 million barrels per day.  So Keystone XL would be bringing in roughly three to four percent of the oil the country demands.  While that’s nothing to turn your nose up at, it is certainly not enough to sever U.S. dependence on Middle Eastern oil, which is one of the main arguments in favor of the oil sands pipeline.  Not to mention, since oil is traded as a global commodity, it’s not likely the pipeline will actually drive down prices at the pump, because those prices are based on futures speculation these days.  Oil sands oil has been making its way to market for years now, and will continue to do so with or without Keystone XL.

There is also the environmental cost to be considered.  While some may argue that the pipeline shouldn’t be built because it would encourage further exploitation of the oil sands, the fact is, those sands are and will continue to be tapped for energy regardless of how dirty or socially destructive the process may be.  That is, until the day Greenpeace decides to break its non-violence decree and rolls in the tanks!  The bottom line is, there is too much money and far too many people benefiting from the sands’ exploitation.  Not just the corporate execs, but working class people are making outstanding wages in oil sands operations.  Yes, the land is being demolished, but most companies are reforesting, and new life is springing up, as is so commonly witnessed over and over again by the sands of time on this planet (and not just at the hands of mankind).  Plus, next generation oil sands technologies such as steam-assisted gravity drainage (SAGD) offer the potential of extracting bitumen from oil sands without needing to deforest at all.

What about oil spills?  You can say there’s a one in a million chance, but they do happen.  The ExxonMobil spill in Yellowstone River this year was a grim reminder that it’s not just offshore spills like BP’s Deepwater Horizon blowout that need to be considered.  Unfortunately for Keystone XL, the pipeline’s proposed path cuts directly through Nebraska’s Ogallala Aquifer, which provides roughly one-third of America’s irrigation water and provides drinking water to tens of millions of people.

“Maintaining and protecting Nebraska’s water supply is very important to me and the residents of Nebraska,” says Nebraska Governor Dave Heineman (R), who is opposed to the pipeline’s current route. “This resource is the lifeblood of Nebraska’s agriculture industry.”

TransCanada has a pretty bad reputation when it comes to its own pipeline safety record.  The first constructed phase of the pipeline, which currently travels through North and South Dakota, Nebraska, Kansas and Oklahoma, spilled 12 times in 2010 in just its first year of operation.  Over 30,000 gallons of crude were released.  Since oil sands crude is actually just diluted bitumen, you’re dealing with oil that is far more acidic, thick and sulfuric than conventional crude oil.  This means a higher likelihood of pipeline corrosion.

So the question really comes down to two things: jobs and the environment.  The social pendulum can swing both ways in this debate.  While the pipeline may employ tens of thousands of people, the potential downside is a hypothetical aquifer-polluting spill that could jeopardize the health of millions and risk the livelihoods of thousands of regional farmers and ranchers.  Chances are the pipeline is going to be built regardless.  The United States of America will settle into its new sense of energy security cozying up to its friendly neighbor to the north.  Gasoline prices may fall a few cents at the pump for a couple of days after the big announcement as speculation runs wild, and rainbows and butterflies will fill the sky.  Ten years later, America is still bankrupt, has a few more domestic oil spills to tack on to its record, and is utterly dependent on foreign countries to meet its energy needs.