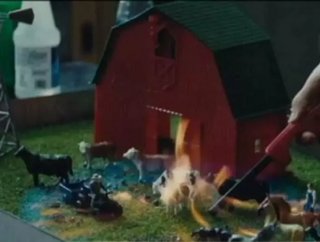 Written by Mark Brownstein Promised Land is not a movie about &ldquo;fracking.&rdquo; You will be sorely disappointed if you go to the theatre expecti...

Promised Land is not a movie about “fracking.” You will be sorely disappointed if you go to the theatre expecting to see lurid visuals of sinister-looking waste water ponds, plumes of diesel soot and road dust, or bucolic landscapes scarred by roads and pipes. You will see none of that.

Promised Land is a movie about what happens before the drilling rigs and man camps rumble into town. It is the story of a rural community, proud but poor, struggling to reconcile itself with an enormous economic opportunity that comes at an enormous cost.

And, despite what you may have read in the blogosphere, it is not reflexively anti-natural gas. The movie actually does a fairly decent job of presenting all sides of the shale gas development debate. I was intrigued to read a Pittsburgh Post-Gazette article from this past June where John Krasinski, a star in the film and co-author of the screenplay, revealed that he originally conceived the story as a community facing major wind farm development. Krasinski made the switch because natural gas development is more topical, and more visceral, than wind development.  His primary point in making the film was to explore what happens when money and power come to a rural community that has neither.

I suspect the reason why the natural gas industry is so on edge about this movie is because the plot device which propels the story forward is a community referendum on whether development will be allowed within its borders. This is exactly the situation the industry faces in Longmont, Colorado, and to the same or similar degree in many other communities around the country.

The central question the movie poses is whether any amount of potential future prosperity is worth sacrificing a pastoral way of life that has defined a community for generations. Worry over polluted water is part of what fuels the townspeople’s anxiety over what to do, but it is far from their only concern.

Does a community have the right to regulate or prohibit industrial development in its borders?  It’s a tricky legal question currently playing out in Colorado and elsewhere around the country, and there is no simple answer.

One thing is certain: the natural gas industry must be forthcoming and honest about the risks that unconventional oil and gas development create, proactive in taking the steps necessary to minimize those risks, and willing to collect and publicly disclose the data necessary to enable communities to evaluate for themselves whether their health and environment are being fully protected. Many people distrust whether industry can develop shale gas safely, and it’s understandable why they are concerned – especially given recent media reports about industry hiding many of the chemicals they use behind questionable “trade secret” claims.  It appears that even the most basic steps toward greater transparency are grudging and incomplete.

In Promised Land, citizens are repeatedly lied to with predictable results. In real life, the natural gas industry has the ability to write a different story through the actions it takes to address community concerns, measure performance and disclose results. That’s a story I want to see.

This blog has been reposted from the Environmental Defense Fund with permission.