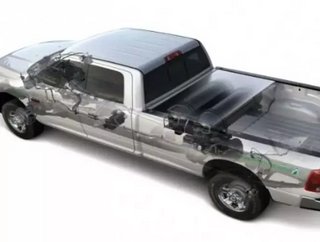 General Motors is taking on the challenge to build fully CNG-powered pickups after disclosing it will offer bi-fuel Chevrolet Silverado and GMC Sierra...

General Motors is taking on the challenge to build fully CNG-powered pickups after disclosing it will offer bi-fuel Chevrolet Silverado and GMC Sierra 2500 pickups in the fourth quarter. The trucks will be built by GM and sent to a supplier to be retrofitted with compressed natural gas tanks.

“The bi-fuel Chevy Silverado and GMC Sierra provide customers with choices in advanced propulsion technology, and because CNG is a clean-burning, domestically produced fuel, it has wide appeal, “said Ed Peper, general manager, GM Fleet and Commercial Operations, in a statement. “The addition of a full-size bi-fuel pickup truck to GM’s fleet portfolio is another milestone in putting the customer first in everything we do – by offering great products, innovative solutions and a great customer experience.”

Apache, a Houston natural gas explorer, has been urging automakers to build CNG vehicles for years. Since 2009, the company has converted 250 of its trucks to CNG, but hopes to more than triple that number. Honda has been selling a CNG powered Civic since the late 1990s, distributing the car to some 200 dealers in 36 states.

Under the management of Fiat, Chrysler is also working hard to answer the American Gas Association's and America's Natural Gas Alliance's call to produce lines of natural gas powered vehicles.

"As a result of our partnership with Fiat, we are able to get to market with this as quickly as we have to start testing to see the future of this CNG technology," Chrysler Ram chief Fred Diaz told the Wall Street Journal.

Ford offers CNG prep kits for about a half dozen vehicles, modifying engines in the vehicles at factories to operate on CNG. Once demand increases, it will be able to switch to factory-built lines of CNG vehicles.

Fueling is the biggest hurdle, with fewer than 400 CNG fueling stations throughout the country. But as gas prices skyrocket and natural gas remains cheap and abundant, converting to domestic natural gas is gaining support.

"We have a supply of natural gas that can last America nearly 100 years," Mr. Obama said in a speech. "My administration will take every possible action to safely develop this energy. Experts believe this will support more than 600,000 jobs by the end of the decade."

GM will start taking orders in April and start production in the fourth quarter.