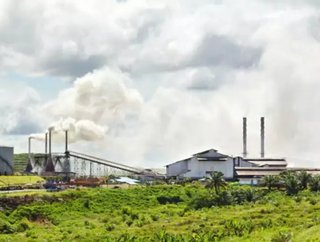 The palm oil plantations in Malaysia are massive green swaths that stretch up into the mountains in the horizon. The largest plantations are one millio...

The palm oil plantations in Malaysia are massive green swaths that stretch up into the mountains in the horizon. The largest plantations are one million hectares and they produce enormous amounts of waste. The empty palm bunches, left over after the palm fruit has been stripped out, are heaped into huge compost piles that sometimes catch fire.

In the capital city of Kuala Lumpur in June, smog caused by fires at farming operations, including palm oil plantations, is so thick even the Petronas Towers disappear into the haze. Because the palm oil industry is so immense (producing more than 50 million tons of oil annually) and economically critical to the region, it is extremely difficult for local officials to limit the pollution.

But one company has come up with a refined plan to reduce palm oil biomass waste and create a marketable biofuel from it. The underlying technology – which was developed by Shell Oil over several years – will allow NextFuels and its partners to produce bio-based petroleum at commercial scale for $75 to $85 a barrel out of wet biomass that has not been mechanically or thermally dried.

“We have a long association and contact with the palm oil industry in both Indonesia and Malaysia and we were looking for a non-food resource biofuel – a drop-in biofuel – and we were aware of an enormous amount of waste generation in the palm oil industry and its negative environmental affects,” says Dr. Ralph Overend, chief scientist at NextFuels.

The company is collaborating on its commercial strategy with Enagra, a biofuel trading company with extensive contacts and partnerships throughout the industry, on the development of its technology. The two companies are owned by the same investors and managed by executives with extensive experience in biofuels. Over the past 10 years, Enagra has conducted over $1 billion in biofuel transactions and will achieve revenues of approximately $150 million in 2013.

Palm oil is in just about every manufactured food product made in the U.S. and Europe. In Africa and Southeast Asia it has surpassed soybean to become their primary cooking oil. The oil palm tree is a perennial, which means it has an enormously high productivity. Unlike the annuals – like soybean and rapeseed – the oil palm tree stays from year to year and has a yield as high as 7,250 liters per hectare per year.

“The palm oil has great value, but the solid waste is a major problem,” Overend says. “There is pressure on the mills to be environmentally correct and they are composting the biomass. But the compost piles do catch on fire and generate the haze in Southeast Asia. I could barely see the Petronas Towers from the hotel next door the last time I was there because of the haze.”

Frank Hughes, NextFuels vice president of business development, director of marketing, recently met with Malaysian officials from the Office of Innovation and Technology in Kuala Lumpur, who told him that the palm plantations are actively looking for ways to either dispose of properly, or monetize the enormous amounts of biomass that they create.

“From every discussion we have had with existing palm plantations they would be open to a technology like this that could come in and solve their residue and waste issues,” Hughes says.

The technology and process NextFuels uses is a system called bio-liquefaction that efficiently transforms agricultural biomass to green energy. Biomass is placed into the plant mixed with water. The mixture is then heated to 330 degrees Celsius while pressure is increased to 220 bar. Increasing the pressure keeps the water from coming to a boil, which conserves energy.

“This is a highly efficient process and except for a small amount of electricity to drive the pumps and circulators, there are no other energy inputs, we use the biogas from the water stream,” Overend says. “The process is delightfully simple, of course, everything depends on the execution.”

When cooled, the hydrocarbons form a putty-like substance called GreenCrude. Roughly 25 percent of the GreenCrude can be burned as a solid fuel in industrial boilers. The remaining 75 percent can be converted into a liquid-fuel equivalent to petroleum that is compatible with existing pipelines and vehicles. The equipment required to convert GreenCrude into liquid fuels, in a process called hydrodeoxygenation, is already installed at most refineries and can accept GreenCrude with minor refinements.

Unlike other biofuels processes, this one does not need to dry the biomass before processing. The process is uniquely and specifically designed to work with wet biomass. As a result, the energy balance achieved is approximately 65 to 70 percent, or 65 to 70 percent of the energy put into the system becomes useable energy.

“We do find some skepticism, but it is a well researched process and other people have been trying to develop it over the years as well,” Overend says. “There's a good body of knowledge that supports this technology.”

NextFuels is currently raising capital to rebuild a bio-liquefaction demonstration plant originally created by Shell in 2005. The system ran for over 1,000 hours and is capable of producing five to eight barrels of oil a day. Enagra and others will finance the cost of reassembling it and demonstrating production over the next 18 months.

NextFuels will partner with plantation owners and others on various projects. The company estimates that transforming residue into fuel could raise the value of plantation real estate by 30 percent or more per hectare.

“There is no such thing as waste,” said Dr. Overend. “The biofuel industry has been hampered by technological and economic challenges. We believe our system helps overcome many of these problems.”

According to Overend, the final product of drop-in biofuel will meet full fuel specifications and the markets for it will be ones that will pay a premium for the renewable carbon in the product. If the process works as well as Overend believes it will, then the next time he visits Kuala Lumpur he will have a clear view of the stainless steel Petronas Towers glint and shine in the sun.