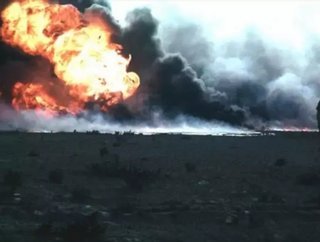 Biogenesis Enterprises, Inc., a division of Oak Creek-based Amiran Technologies LLC, has been given an initial contract of $15 million to remediate t...

Biogenesis Enterprises, Inc., a division of Oak Creek-based Amiran Technologies LLC, has been given an initial contract of $15 million to remediate the Kuwait oil spill from the first Gulf War, termed by environmental experts as the largest ecological disaster in the history of the world.

The oil spill caused by Saddam Hussein's Iraqi troops in 1990 led to an oil leakage lasting over eight months after the Gulf War ended in 1991. Hussein's forces blew up more than 600 oil wells, and the flowing oils and billions of gallons of sea salt water used to extinguish the flames devastated thousands of acres of land. Some of the oil seeped over 40 feet into the sand, severely damaging ecosystems and an aquifer used for drinking water.

Biogenesis will utilize their unique sand washing system to extract and separate the oil, salts and other contaminants.

“This is a massive job. The amount of oil to be reclaimed in Kuwait is at least ten times greater than the amount of the oil from the BP spill in the Gulf of Mexico. In some places it is over 40 feet deep in the soil,” said Dr. Amiran.

“The oil spilled by Iraq's troops was about 60 million barrels, or about $5 billion worth in today's dollar,” Amiran concluded.

“We are honored to be part of the initial phase of this historic clean-up,” said Phil Skrade, CEO of Amiran Technologies.

“After our unique cleansing system is employed, it is our goal to give the Kuwaitis clean, construction grade sand and refinable oil for sale” Skrade concluded.

Amiran Technologies and Biogenesis are working on getting involved in similar oil reclamation projects closer to home in North America, offering remediation to polluted lakes, rivers and streams. It will turn the sediment into fine topsoil for sale and convert livestock manure into dry organic pelletized fertilizer, which is e-coli and pathogen free. It also offers metal reclamation from waste streams that are generated from the production of steel as well as ecologically sound fire suppressants.