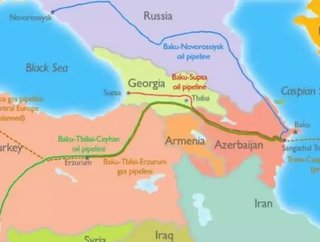 The European Union (EU) is seeking alternative suppliers of natural gas from the East and is moving forward with talks on constructing a pipeline conn...

The European Union (EU) is seeking alternative suppliers of natural gas from the East and is moving forward with talks on constructing a pipeline connecting Azerbaijan and Turkmenistan to the EU via the Caspian Sea.  However, Russia—who supplies roughly one-fourth of Western Europe’s natural gas—is staunchly opposed to the new pipeline.

The EU is seeking new suppliers to ensure consistent delivery of natural gas to the continent.  Approximately 80 percent of the gas bound for Western Europe passes through the Ukraine, and conflicts between the former Soviet nation and Russia have resulted in numerous occasions where gas supplies were cut off.  EU officials hope that the new Caspian Sea pipeline will offer greater energy security in the future.

A mandate approved Monday will see the EU proposing a union-wide treaty in support of the completion of the trans-Caspian pipeline.  The pipeline itself would attach to the EU-supported Nabucco pipeline that bypasses Russia.

"Europe is now speaking with one voice. The trans-Caspian pipeline is a major project in the Southern Corridor to bring new sources of gas to Europe. We have the intention of achieving this as soon as possible," EU Energy Commissioner Oettinger said in a statement.

The Nabucco pipeline project has been on hold for fears that not enough suppliers could be found to fill the pipeline.  However, by connecting the trans-Caspian pipeline, those supply concerns would be quelled.  Turkmenistan has already agreed to supply the EU with 10 billion meters of gas per year.

Russian officials have expressed their contention to the proposed pipeline.  Foreign Ministry spokesman Alexander Lukashevich claims that only the five countries bordering the Caspian have the right to settle issues regarding the use of the inland body of water.  No doubt, the EU will have to deal with Kazakhstan, Iran, and ultimately Russia—who all border the Caspian as well—if it hopes to successfully construct a pipeline in the shared waters.

Other challenges facing the proposed pipeline include high seismic activity in the region and a tectonic seabed.  Nonetheless, the pipeline could serve the greater purpose of uniting Azerbaijan and Turkmenistan, who have been in contention over a disputed portion of the Caspian Sea.  With Russia in the process of constructing its South Stream pipeline to carry gas from a southwestern Russian port to southern Europe via the Black Sea, competition is already heating up.  At any rate it seems like the EU will come out the victor, with multiple gas pipelines being built to connect the gas rich East to the power hungry West.