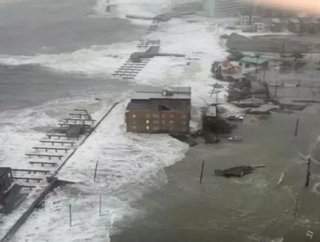 As Hurricane Sandy rips through the East Coast, millions woke up today without power. New York and New Jersey were among the worst hit states as seawa...

As Hurricane Sandy rips through the East Coast, millions woke up today without power. New York and New Jersey were among the worst hit states as seawater fills the streets and floods thousands of homes and businesses.

Winds at 80 mph whipped through the coast Monday night, killing at least 33 people across 8 states from the Carolinas to Maine. Two nuclear power plants are under threat, at least 7.4 million people are without power, over 18,000 flights have been cancelled and the presidential campaign has come to a halt. Yet, the full extent of the damage is still unknown.

"We are in the midst of urban search and rescue. Our teams are moving as fast as they can," New Jersey's Gov. Chris Christie said. "The devastation on the Jersey Shore is some of the worst we've ever seen. The cost of the storm is incalculable at this point."

Frankenstorm Approaches Pennsylvania: Are You Prepared?

Lower Manhattan saw a nearly 14-foot surge of seawater cascading through streets and highways, while water flooded the unfinished construction pit at the World Trade Center. Up to 100 houses were destroyed in a huge fire in a beachfront neighborhood in Queens Tuesday.

"This will be one for the record books," said John Miksad, senior vice president for electric operations at Consolidated Edison, which had more than 670,000 customers without power in and around New York City.

Although the storm is weakening, it will continue to bring heavy rain, high wind and flooding across the coast. The President has declared a major disaster in New York and Long Island, signing a disaster declaration for New Jersey.