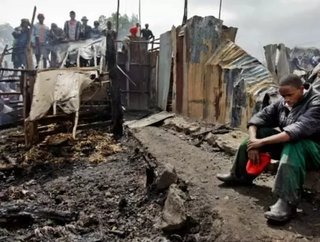 A hellish scene is being reported from Kenyas capital of Nairobi, where spilled fuel from a broken gasoline pipeline owned by Kenya Pipeline Company bu...

A hellish scene is being reported from Kenya’s capital of Nairobi, where spilled fuel from a broken gasoline pipeline owned by Kenya Pipeline Company burst into flames.  The fire was isolated to an impoverished slum sector in the city and resulted in more than 75 confirmed deaths and over 100 injuries.

Kenya’s poor reportedly flocked to the scene of the ruptured pipeline to collect the gasoline flowing into the streets when flames erupted in a 300-yard radius around the leak.  Shacks and people were set ablaze.  Several burn victims jumped into the nearby river for relief, and charred bodies are now found floating down the waterway.

Red cross officials have confirmed that 75 are dead, but fear that more are likely to be discovered.  Many of the dead include children, and an informal youth education center reportedly went up in flames with children inside.

Local hospitals have been treating burn victims, but have already run out of blood for transfusions.

"This is a terrible accident," said Prime Minister Raila Odinga, who visited the wounded in hospital.  Odinga claims the government would cover medical expenses for the injured and pay compensation to the surviving families of the dead.  He also said he had visited the offices of the state-owned Kenya Pipeline Company, who operate the pipeline.  "There will be a proper investigation," he added. "What I've seen is shocking, terrible.  This I think is one of the worst disasters that has happened here in this country in the oil sector."

A similar event occurred just two years ago in Kenya, where an overturned tanker exploded while people attempted to collect spilled fuel.  Over 120 were killed in that incident.