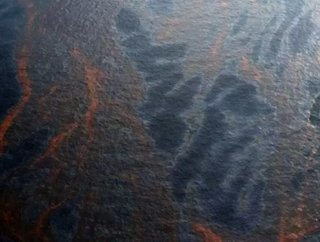 Royal Dutch Shell says the 10-mile oil sheet spotted by the US Coast Guard in the Gulf of Mexico did not originate from its nearby operations. Shell e...

Royal Dutch Shell says the 10-mile oil sheet spotted by the US Coast Guard in the Gulf of Mexico did not originate from its nearby operations. Shell estimates the slick accounts for about six barrels of oil, or 252 gallons.

Today a Coast Guard helicopter with a pollution officer on board flew above the oil slick in an effort to determine where the oil came from. Although Shell denies any relationship with the spill, the company sent a response ship to skim the area as a precaution.

The sheen was reported in an area about 50 miles from the site of BP's Macondo well. It's hard to pin point the origination of the sheen as oil tends to move and spread quickly. Earlier this week, for example, 50 gallons of oil were leaked from a tanker in the Mississippi River, which eventually extended some 30 miles downriver.

Shell has six major offshore facilities, 13 platforms and number f subsea systems in the area. If not from an offshore oilfield, possible sources of the sheen could include seepage from the bottom of the Gulf or fuel discharge from passing ships.