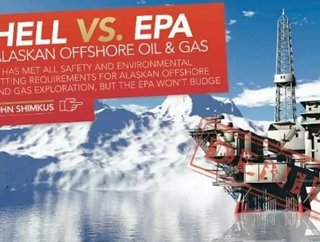 TO ENHANCE YOUR READING EXPERIENCE, VIEW THIS STORY IN OUR INTERACTIVE READER BY CLICKING THE IMAGE IN THE TOP RIGHT CORNER OF YOUR SCREEN! Royal Dutch...

Royal Dutch Shell has reentered the Alaskan offshore oil and gas market and met all Environmental Protection Agency (EPA) and legislative prerequisites to conduct regional exploration.  However, in spite of going above and beyond requirements, the EPA has continually rejected approval of Shell exploration in Alaska’s Chukchi and Beaufort Seas.

In exclusive interviews with Shell Alaska representative Curtis Smith and U.S. Senator Lisa Murkowski (R-Alaska), Energy Digital attempts to get to the bottom of the matter.

Can you describe Shell’s progress in attaining offshore permits in Alaska?

Smith:When it comes to permits you need about 1,000.  You either get them all or you don’t drill.  We have spent over $3.5 billion on leases, start-ups and asset investments since we first reentered Alaska in 2005.  We’re 5 years into this now, and several billions of dollars, without having drilled a single exploratory well!

Murkowski: When the Interior Department processes exploration plans of this nature for the Gulf of Mexico, the average length of time for approval is just 43 days.  The EPA’s failure to process a competent permit is inexcusable.  It’s the most costly example of regulations needlessly stalling economic recovery and creating a terrible business environment that you’ll find anywhere in America.  When the EPA did finally issue a permit, it was invalidated by its Environmental Appeals Board.  The EAB basically changed the rules on Shell in the middle of the process.

Has Shell met all the safety and environmental requirements necessary?

Smith: We have a world-class Arctic tested oil spill response fleet. Our whole ethos is that we keep the oil that we find in the pipe, and history suggests that we do that very well.  But in the unlikely event of a blowout, our oil spill response team would be onsite and recovering that discharge within one hour.  That’s unprecedented.

Murkowski: Shell has assembled an unprecedented oil spill response program that includes an onsite oil spill response fleet, near-shore barges and response vessels, and onshore support teams. Since the Gulf of Mexico spill, Shell has updated its spill response plan to include a subsea oil containment system to capture and recover oil if there is a blowout, an upgraded and more frequent testing of its blowout preventer, and a second drilling rig capable of drilling a relief well, if needed.

How can Shell’s offshore activities in Alaska benefit the state’s economy?

Murkowski: Responsible development of our oil and gas resources in the Chukchi and Beaufort seas is a big part of the future of oil production in our state. Without new production, the trans-Alaska oil pipeline will move closer and closer to shutdown. If that happens, oil production on the North Slope is over and with it will go thousands of well-paying jobs.

Smith:Senator Murkowsi along with Senator Mark Begich have been very proactive for making Alaska’s case—the industry’s case as well—in framing the need for the thousands of jobs created, new domestic energy production, and new oil for the Trans-Alaska pipeline that is desperately low. The pipeline here in Alaska is only a third full.

Do the economic benefits outweigh the environmental risk?

Murkowski: You have to strike the proper balance. Risk is inherent in any type of energy production but you have to take steps to mitigate it to the greatest extent possible. I believe Shell has taken steps to do that.

Do you believe there may come a time in this century when oil can successfully be replaced with renewable, less environmentally risky alternatives, or should oil reserves be exploited to their maximum potential regardless of renewable options and environmental degradation?

Murkowski: I think that reduction of fossil fuels is a goal we should continue to strive for, but we also have to be realistic and acknowledge that we’re going to use oil for many, many decades to come. What we can do, though, is make sure we dedicate a sizable portion of the revenues we earn from oil production to investing in alternative energy sources. But that means we actually have to be producing our own resources first.

Can you comment on the Senate not passing a recent bill—approved by the House of Representatives—that would have expedited offshore permitting?

Murkowski: It’s disappointing we couldn’t agree on legislation to advance responsible production. I think the Republican plan was a pretty good compromise. It wasn’t everything I would like to see, but it was a good start. Now we have to see if we can’t find some common ground in the committee process. Our focus should be on legislation that advances safety, production and a fair return of revenue to coastal states.

(Note: Energy Digital reached out to the EPA’s Deputy Press Secretary on several occasions to participate in this question and answer feature, but no reply was granted.)