Snowy Hydro Limited has a long and proud heritage as an Australian company. Growing from early beginnings as an electricity generator into a leading end-to-end energy provider, Snowy Hydro captures the essence of the innovative Aussie spirit.

“Snowy Hydro was dreamed about back in the 1880s when they were trying to move water from the east of Australia to the very dry west. As a result, the inception of a massive hydropower system that has the capacity of generating 600 megawatts (MWs) was developed,” said Managing Director and CEO, Paul Broad.

“Electricity generation was in the beginning a way to pay to move the water. But now, the scheme can generate 4100 MW of renewable electricity and Snowy Hydro has grown to be the leading provider of peak electricity in the NEM,” Broad said.

Completed in 1974, the Snowy Scheme is one of the biggest engineering and construction projects undertaken in Australia, taking over 25 years to complete with more than 100,000 people from over 30 countries working on the project. Today, its construction is an important symbol of Australia’s identity as an independent, multicultural and resourceful country.

In 2014, Snowy Hydro began to emerge as a major player in the energy retail sector with almost one million retail account holders. At the same time, the company is embracing technology as a means to improve efficiency, reliability and connectivity across the company. 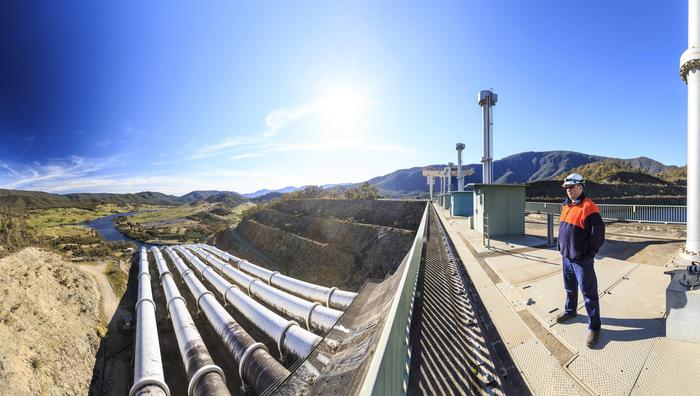 “The key to our success is our ability to utilise the Snowy Scheme’s large, reliable and fast start capability to our advantage, whether it’s through spot generation, risk management for our wholesale customers, futures contracts or electricity and gas supply to households and commercial and industrial customers,” said Broad.

The Snowy Scheme is comprised of 16 major dams, nine power stations (two underground), a pumping station and 145 kilometres of interconnected tunnels and pipelines and 80 kilometres of aqueducts. The company commenced a $68 million modernisation program in 2012 to improve efficiency and update infrastructure. This is in addition to continued investment in maintaining and improving the reliability and response time of assets.

“The physical upgrades include smarter, more efficient runners on the turbine, which means we’re getting 10-15 percent more output. The turbines are running far more efficiently and that’s added enormously to our value,” said Broad.

“Secondly, we’ve integrated these machines with a centralised control room. In the past, all these plants were run individually and now they’re centralised so we can dispatch electricity  faster and more efficiently and make this work seamlessly across the whole suite of generation assets we have.” 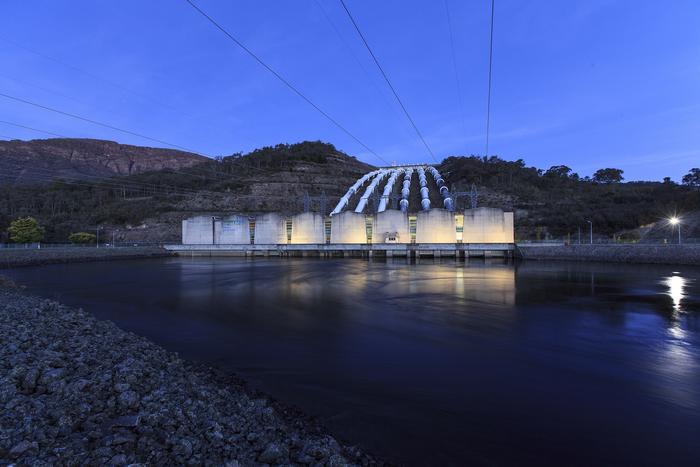 Recent acquisitions have also allowed Snowy Hydro to bolster its energy retail business. The company has invested almost one billion dollars in acquisitions in recent years to grow its customer base and expand generation assets, including acquiring energy retail company Lumo Energy in late 2014 and integrating it with  its successful Red Energy business.

The combination of Red and Lumo has helped Snowy Hydro nearly double the size of its retail business to almost one million customer accounts and become the fourth largest energy retailer in the NEM.

“Red Energy has been part of our business for more than a decade. We are now working on integrating the two successful retail businesses into one extraordinary retail business, while remaining focused on superior customer service,” said Broad.

According to Broad, Red and Lumo now offer both electricity and gas to customers in Victoria and New South Wales, while expanding the availability of gas to other markets, enabling a dual fuel offering which attracts and retains more retail energy customers.

“Our retail companies Red Energy and Lumo Energy pride themselves on customer service with energy backed by one of the great civil engineering wonders of the modern world—the Snowy Mountains Scheme.”

Ace up the sleeve

Snowy Hydro continues to participate in emerging technologies that will help challenge and disrupt the energy industry and they remain at the forefront of Australian innovation as the energy industry shifts towards consumer-led generation, energy storage and use.

“We embrace technology—it is at the heart of efficiencies for our company,” said Broad.

A great example is Snowy’s trial of battery storage with Panasonic. The system is expected to help solar households double their rates of self-consumption from around 30 percent to 60 percent, by storing excess solar output during the day for use later, as well as provide a cost effective alternative to grid infrastructure investments.

According to Broad, the 8kWh lithium-ion battery storage system, with an output of 2kW, has been designed specifically for the Australian market, which best suits solar arrays of around 5kW.

“Battery storage is just part of where we think the modern energy world is headed. Panasonic is a great partner for us given the technology and innovation they’re adopting in their own backyard. We think they’ll be a beautiful fit for us in the business we run for the foreseeable future,” said Broad.

Along with innovative partnerships, Snowy intends to harness the power of smart metering technology as well.

“Metering is going to become a bigger issue in Australia. Traditionally it’s been controlled by the network companies here, but that’s about to change in the next two years. We will be at the forefront of smart metering, establishing another point of contact with the household so we can provide multiple services with our system.”

The true ace up Snowy Hydro’s sleeve is the introduction of high-tech unmanned underwater vehicles (UUV) for inspection and the use of drones to inspect and report back on the state of assets.

In the past, inspecting the many kilometres of  tunnels was a massive operation, requiring the tunnels to be drained of water, essentially shutting down part of the Snowy Scheme and several power stations for up to a month.

“We used these unmanned subs for the first time about 18 months ago. The technology has been around for a while but the new innovation is the sonic wave, which can give you forensic details of the structures in these tunnels. Now we can build maps of the tunnels and revisit them regularly to see any movements like rock caving that might indicate a problem sometime down the road,” said Broad.

“This gives us phenomenally detailed information and the ability to build detailed models of the assets we have and really understand the condition they’re in, including better understanding the capital investment we have to make to sustain them.” 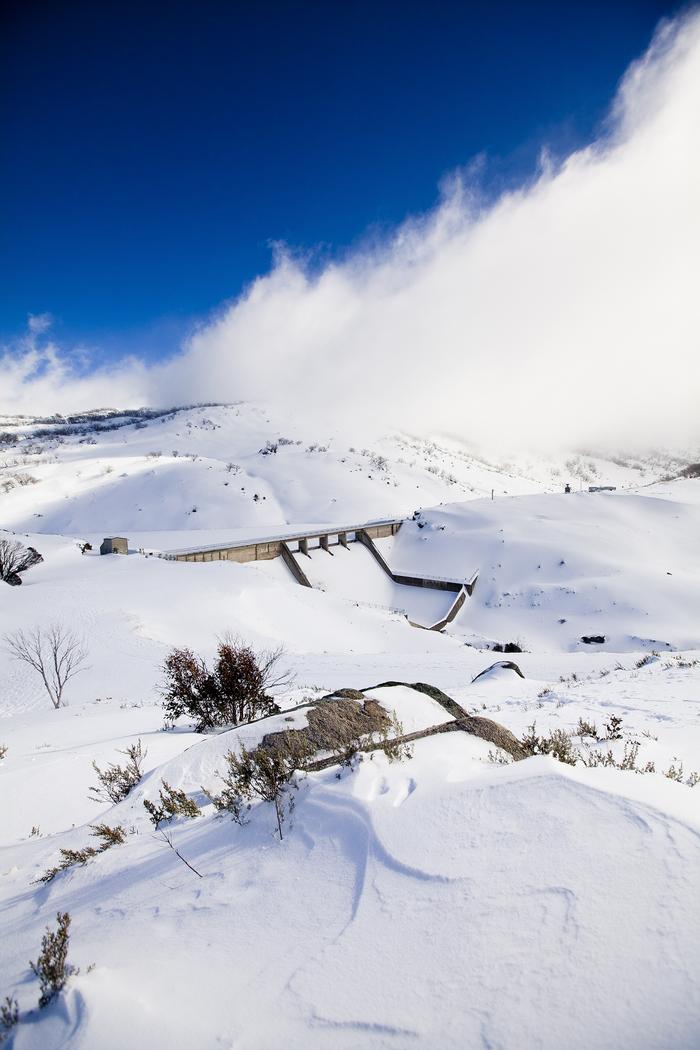 Shining opportunities on the horizon

As a predominantly hydro company, Snowy is a leader in renewable energy and intends to compete with the likes of Tesla and others to capture more of the solar market in Australia—an estimated 1.4 million households. Snowy currently services only 30,000 of those solar powered homes through its retail companies, but according to Broad, that’s merely the beginning.

“We are entering the solar market very carefully because it’s a new frontier we haven’t extensively explored. Snowy doesn’t necessarily have a comparative advantage yet,” said Broad. “But with our innovative battery technology trial and solar technology, we are formulating a very competitive product that we and the people of Australia can be proud of.”

As a cornerstone of the Australian historical and energy landscape and an integral part of the communities in which they operate in, Snowy Hydro is taking things to new levels in 2016 and beyond.