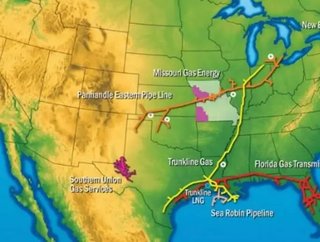 TO ENHANCE YOUR READING EXPERIENCE, CLICK HERE TO VIEW THIS ARTICLE IN OUR INTERACTIVE READER! The United States is heading into a boom period for natu...

The United States is heading into a boom period for natural gas thanks to the recent discovery of shale gas reserves.  New hydraulic fracturing technology is giving companies access to oil and gas reserves once thought to be unreachable.  Domestic and international companies are scrambling to buy up as much shale land as possible, but there’s a crucial link in the natural gas supply chain that has also drawn much attention.  With the shale boom will come the need for increased pipeline capacity to move the abundant natural gas from place to place.  Southern Union Company owns and/or operates over 15,000 miles of natural gas pipelines throughout the American Midwest and southern states, and summer 2011 has seen a heated bidding war arise as pipeline companies Energy Transfer and Williams compete to acquire Southern Union.

Initially, Energy Transfer Equity announced a planned merger with Houston-based Southern Union on June 16.  The company offered $7.9 billion, which included roughly $3.7 billion of existing Southern Union debt, equating to $33.00 per share and $4.2 billion.  The deal was unanimously approved by the board of directors of both companies and would have created the largest natural gas pipeline company in the U.S.

Enter Williams, another natural gas pipeline company with its eyes on Southern Union’s assets.  On June 23, Williams proposed to acquire all of Southern Union’s outstanding shares for $39 per share for a total enterprise value of $8.7 billion.  The company’s all-cash proposal represented a premium of 18 percent over the nominal purchase price of Energy Transfer’s bid.

"Williams' proposal is compelling for both Southern Union and Williams investors," says Williams President and Chief Executive OfficerAlan Armstrong. "Our proposal provides significantly greater value to all Southern Union shareholders than they would receive from Energy Transfer and a path to realize such premium value that is more transparent, more expedient and more certain.

"We are confident the combination will further strengthen our ability to deliver value and growth from an extraordinary suite of energy-infrastructure assets.  The two asset portfolios are complementary and strategically positioned in growing supply areas, including key shale basins, and end-use markets.”

Just to be safe, Energy Transfer went ahead and amended its bid, offering Southern Union $8.9 billion, including $5.1 billion in cash and Energy Transfer Equity common units.

Not to be outdone, Williams upped the ante and offered $44.00 per share in cash, for a total enterprise value of $9.4 billion.

Energy Transfer responded with $9.4 billion, including $5.7 billion in cash and common units (with cash not to exceed 60 percent of the aggregate).  Under the revised bid, Southern Union shareholders could elect to exchange their common shares for $44.25 of cash each or one Energy Transfer Equity common unit.  The bid was unanimously approved by both companies’ board of directors.

"Our ability to be creative with our structure has improved the tax efficiency, therefore allowing us to increase our price," said Kelcy Warren, Energy Transfer Equity's Chairman of the Board of Directors and largest unitholder. "This is simply a superior transaction with upside potential and the ability to close on an expedited basis. The terms of this revised agreement demonstrate our commitment to executing this transaction."

Chairman and CEO of Southern Union George L. Lindemann says, "This revised merger agreement provides our shareholders with superior value, greater certainty to close, and unrivalled strategic benefits that could not be achieved through any other industry combination."

Vice Chairman, President and COO of Southern Union Eric D. Herschmann added, "We have negotiated the most compelling transaction for Southern Union shareholders, both in terms of immediate cash value and potential upside of the combined companies through long-term equity ownership in Energy Transfer Equity."

On July 29, Energy Transfer Equity and Southern Union announced the expiration of the waiting period under the Hart-Scott-Rodino Antitrust Improvements Act of 1976—a law requiring a one month review period prior to the completion of a merger or acquisition in which the Federal Trade Commission and Antitrust Division of the Department of Justice can ensure that the merger doesn’t violate U.S. antitrust laws.

With the antitrust hurdle overcome and both boards of directors satisfied, it looks like Energy Transfer has clinched the deal.  This back and forth bidding war will end in a landmark merger in the natural gas sector, and with Energy Transfer on top, it is likely the U.S. will see the formation of a new pipeline king!