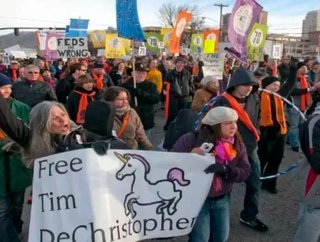 I sit here writing filled with anger and outrage at a government that has failed its people. Today I learned for the first time about the case of envir...

I sit here writing filled with anger and outrage at a government that has failed its people.  Today I learned for the first time about the case of environmental activist Tim DeChristopher, more commonly known as Bidder 70.  On December 19, 2008 he protested the lease auction of public land in Utah held by the Bureau of Land Management (BLM) to oil and gas companies.  DeChristopher successfully bid on 14 parcels of land totaling 22,500 acres for $1.8 million.  However, DeChristopher had no intention of exploring the land for oil and gas, but rather wanted to preserve what he considered a national treasure.  Despite having raised enough money to cover the initial payments for the parcels, he was sentenced by a federal jury to two years in prison.

Indicted on April 1, 2009, DeCristopher was charged with a two-count felony for violation of the Federal Onshore Oil and Gas Leasing Reform Act and making false statements.  DeChristopher was prohibited by District Judge in the case, Dee Benson, from providing necessary arguments for his defense, such as the fact that the lease auction—which was carried out in the final days of the Bush administration—was deemed unlawful, or that DeChristopher raised the necessary money to pay for the parcels.  He was also barred from presenting a case against the legal formal appeals process to fight against the selling of the parcels, the main reason he resorted to such drastic measures to preserve the land.

"The government has made the claim that there were legal alternatives to standing in the way of this auction. Particularly, I could have filed a written protest against certain parcels. The government does not mention, however, that two months prior to this auction, in October 2008, a Congressional report was released that looked into those protests. The report, by the House committee on public lands, stated that it had become common practice for the BLM to take volunteers from the oil and gas industry to process those permits. The oil industry was paying people specifically to volunteer for the industry that was supposed to be regulating it, and it was to those industry staff that I would have been appealing."

In February 2009, Interior Secretary Ken Salazar officially halted the sale of 77 of the Utah lease parcels, some of which were those bid on by DeChristopher himself, criticizing the Bush administration for conducting a “rush review” of the contested lands.  However, in light of all this, DeChristopher was still sentenced to two years in prison, three years supervised probation, and given a $10,000 fine.

The U.S. Attorney’s office’s statement regarding the case claims that DeChristopher is guilty of "disrupting open public processes and causing financial harm to the government and other individuals… To be sure, a federal prison term here will deter others from entering a path of criminal behavior."

"The certainty of this statement not only ignores the history of political prisoners, it ignores the severity of the present situation. Those who are inspired to follow my actions are those who understand that we are on a path toward catastrophic consequences of climate change. They know their future, and the future of their loved ones, is on the line. And they know we are running out of time to turn things around. The closer we get to that point where it's too late, the less people have to lose by fighting back. The power of the Justice Department is based on its ability to take things away from people. The more that people feel that they have nothing to lose, the more that power begins to shrivel. The people who are committed to fighting for a livable future will not be discouraged or intimidated by anything that happens here today.

“And neither will I. I will continue to confront the system that threatens our future. Given the destruction of our democratic institutions that once gave citizens access to power, my future will likely involve civil disobedience. Nothing that happens here today will change that. I don't mean that in any sort of disrespectful way at all, but you don't have that authority. You have authority over my life, but not my principles. Those are mine alone."

Energy Digital tried to contact Judge Dee Benson, but was denied comments.  This case should be of growing concern to all Americans and anyone in the world willing to stand up to political injustice.  How is it that major financial firms in the U.S. can cause the largest financial collapse in the history of the world and not a single CEO is in jail?  Instead, the federal government hands these corporations $700 billion in taxpayer money.  Meanwhile, a single young activist trying to make a change in a fraudulent land lease sale with the odds stacked against him winds up in prison for two years simply so the U.S. Attorney’s office can set an example to detract others from similar peaceful protests.

Furthermore, who is this Judge Dee Benson and which oil companies are paying him off?  There is something very very wrong with this picture, and we the people need to stand up to this injustice.  Even if you’re in the oil business you should investigate this case and realize that it’s not the environmental activism aspect that is of concern, but rather the abuse of judiciary power in trying civilians.  Cases of people being denied a fair trial and charged ridiculous prison sentences will only grow if something is not done.

Please make a donation to the Tim DeChristopher legal defense fund so that this man may actually be given his fair day in court!  Visit www.bidder70.org to learn more and make your donation.