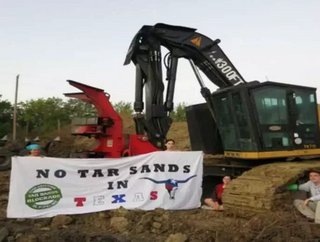 In Texas, a judge ordered the halting of TransCanada&#39;s Keystone XL pipeline after a landowner filed a lawsuit claiming that the company lied to Te...

In Texas, a judge ordered the halting of TransCanada's Keystone XL pipeline after a landowner filed a lawsuit claiming that the company lied to Texans about type of oil it would be transporting.

Landowner Michael Bishop, a 64-year-old retired chemist in medical school, claims that TransCanada lied in telling Texans that it would use the pipeline to transport crude oil, which will instead be used to transport tar sands oil, or diluted bitumen. According to Bishop, tar sands oil does not meet the state's definition of crude oil as “liquid hydrocarbons extracted from the earth at atmospheric temperatures,” he told the Associated Press, which mean it “has to be heated and diluted in order to even be transmitted.”

Environmentalists argue that tar sands oil is a lot more difficult to cleanup should a spill occur, contaminating nearby water and land. Not to mention, refining the product in Texas will raise its already high greenhouse gas emissions rates.

Texas County Court at Law Judge Jack Sinze will not hear the case until Dec. 19, which was quickly pushed to Dec. 13, according to TransCanada spokesman Shawn Howard. According to statements released by the company, the tar sands are in fact a form of crude oil and the pipeline is expected to come back into operation in late 2013.

Earlier this year, many other Texan farmers expressed their opposition to the pipeline. According to a blog from the NRDC's Susan Casey-Leftkowitz, the plan to split the giant pipeline in two and start building in Texas will put landowners at high risk and will likely lead to even higher gas prices in the Midwest:

“...it will divert tar sands from the Midwest to the Gulf, raising American oil prices and likely also gasoline prices,” Casey-Leftkowitz writes. “An Oklahoma to Texas tar sands pipeline will mean more tar sands converted to diesel and available for export overseas. It will mean less tar sands remaining in the US, even while Americans bear the risks of the pipeline.”

It's a tough fight, but Bishop is determined to make his case. Despite the oil giant's legal power and support expected to make an appearance at the hearing, he told the Associated Press: