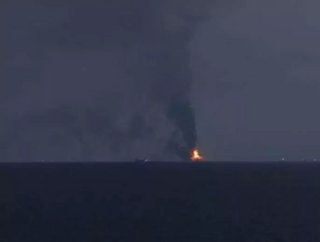 Two remain missing after one of Chevron&#39;s offshore rigs exploring oil and gas fields off the coast of Nigeria caught fire Monday. Thus far, 152 wo...

Two remain missing after one of Chevron's offshore rigs exploring oil and gas fields off the coast of Nigeria caught fire Monday. Thus far, 152 workers have been found and the company is still investigating the remaining persons and ultimate cause of the fire.

It's suspected that the fire was caused from a major build up of gas pressure from drilling, leading to a “gas kick.” Nnimmo Bassey, who runs an environmental watchdog group in the country, told the Guardian, “Workers were trying to contain the gas pressure and they didn't succeed.”

Chevron spokesman Scott Walker said the company is "still investigating the incident and ... working to fully understand what happened." There was some "sheen around the well that is being investigated."

The fire is still blazing, but Chevron says there has been no oil spillage from the incident.

Nigeria is Africa's largest oil producer and the fifth-largest crude oil exporter to the U.S. However, over 50 years of oil production in the region has caused some incredible environmental damage throughout the delta's creeks and offshore waters.

In December, news of a second oil spill in the last two months on behalf of Shell Petroleum has brought more attention to the foreign oil companies operating in Nigeria. The cumulation of these events should encourage the local government to increase monitoring of activities of oil companies in the region to prevent future incidences.