Which U.S. States are Leading the Way in Grid Modernization?

Utilities
Admin
2 min
There’s no denying it: smart grids are here now and are the way of the future. In the U.S., some states are making the transition much quicker...

There’s no denying it: smart grids are here now and are the way of the future. In the U.S., some states are making the transition much quicker than others. In a new report released from GridWise Alliance and the Smart Grid Policy Center titled 2014 Grid Modernization Index (GMI), a breakdown is provided of how quickly individual states are bring their energy grids up to date.

“The United States (U.S.) electric system is undergoing a transformation unlike anything we have witnessed in the past 100 years,” the report reads. “By the year 2030 or earlier, the grid will operate in a dramatically different way than it operates today, and interactions with the grid will change significantly as well. The rapid evolution of electricity supply and the increasing engagement of consumers, as producers/owners of distributed energy resources, has had major implications for the reliability, resiliency, and security of transmission and distribution grids. At the same time, our nation has an increasingly digital economy and is, therefore, even more dependent on affordable, secure, reliable, and resilient power.”

So, which states are leading the way? The states were scored based on state support, customer engagement, and grid operations.

Perhaps surprisingly, in the top 3, Texas is at the forefront of grid modernization, followed by California and Illinois.

The report also found that state support makes a huge difference in modernizing the grid.

“The states that received federal Smart Grid Investment Grants have higher GMI scores, with the

impacts reflected most substantially in the Grid Operations component,” the report reads. Looking at the full scope of the index, that certainly proves to be true. 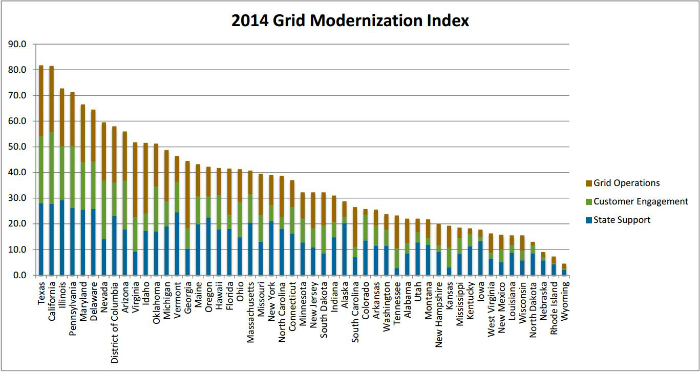 “Overall, there is an increasing focus at the state level on DERs (distributed energy resources) to enhance grid resiliency particularly in the Northeast where Hurricane Sandy had such a devastating impact in certain areas,” the report reads. “States increasingly recognize that to effectively integrate DERs, the grid will have to be modernized.”

You can find the full, in-depth report here.