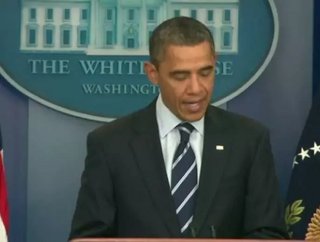 Facing the prospect of yet another government shut-down since Republicans won the House, a deal has finally been reached in Congress to extend federal...

Facing the prospect of yet another government shut-down since Republicans won the House, a deal has finally been reached in Congress to extend federal government funding and a pay roll tax cut for an additional two months. The catch? Republicans added a provision related to the Keystone XL Pipeline that would require the White House to come to a decision on its construction in the next 60 days.

Last month, President Obama made it clear that the decision would be postponed until after the 2012 elections, and that any bill requiring a decision on the pipeline would be vetoed in the meantime. However, after Republicans somehow threatened to force the decision into the payroll tax negotiations this week, the White House has somewhat contradicted itself.

However, while the bill grants a permit to move forward with construction of the pipeline within 60 days, it does not mandate that the pipeline will actually get built. So, while the language may have publicly softened regarding the decision, the White House could easily say no when the time comes—and presumably will.

In that case, this may be a fight the White House is willing to have in another two months in order to briefly extend the payroll tax cuts that would otherwise significantly increase taxes for the majority of Americans. That is what environmentalists are hoping for at least. Though some fear the White House is backtracking, an extended lower tax rate for the middle class isn't worth losing over a little non-abiding language inserted into a bill, so long as the President does in fact say no when decision time comes.