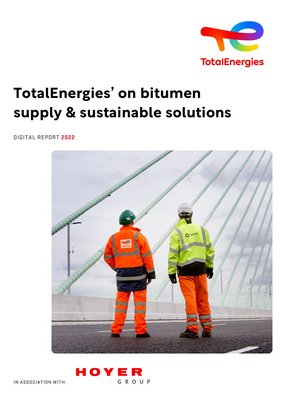 TotalEnergies is a multi-national energy company, founded in 1924 in France. Previously known as Total, in 2021 the Company rebranded as TotalEnergies – in line with its transformation into a broad energy company and a world-class player in the energy transition, including through its own carbon neutrality commitments. TotalEnergies has activities in more than 130 countries worldwide.

TotalEnergies is one of Europe’s largest producers of bitumen and its affiliate, TotalEnergies Marketing UK, has been a market leader in UK bitumen supply for decades, including through the supply of pioneering bitumen products manufactured in its Preston production site. Bitumen is the black viscous substance used to construct roads.

Garr Chau is the Supply Chain Manager for TotalEnergies Marketing UK, a role he landed through a graduate scheme.

“My role involves overseeing a team of planners and the supply of bitumen and additives to our supply locations, imported via ship, rail and road, in addition to road deliveries of bitumen products to our customers from those supply locations.”

TotalEnergies is transforming into a broad energy company and has committed to the Paris Agreement and the United Nations Sustainable Development Goals.

“We have an ambition and that is to help with the world's energy transition, to reinvent the production and use of energy and to reach Net Zero by 2050 together with society”, says Chau.

TotalEnergies has set objectives to reduce its emissions.

The first step is to reduce Scope 1 and 2 CO2 emissions from TotalEnergies’ worldwide operations.

“We've set ourselves measurable short-, medium- and long-term goals - so by the year 2030 we've committed to reducing Scope 1 and 2 emissions at our own facilities by over 40% versus 2015 levels,” explains Chau.

In addition to decarbonisation, the Company seeks to achieve this through improving efficiency across all operations, as well as achieving zero routine flaring at refineries, cutting methane emissions leaks in its gas operations and also by investing significantly in carbon capture and storage capacity as well as natural carbon sinks.

TotalEnergies has also set a 2030 target to reduce its global Scope 3 emissions - i.e. those from the energy products used by its customers - to below 2015 levels.

“The way we can influence this is to work with society - our customers, suppliers, partners and public authorities. We have to transform the way that we all use energy so that we can be sustainable.”

“We are changing our energy mix as a company, hence why we are transforming from being an oil & gas company into an integrated and broad energy company. We are reducing the carbon intensity of petroleum products sold by more than 30%, whilst we also plan to produce and sell 30% more energy products, especially through growth in electricity and liquefied natural gas (LNG). LNG, in particular, is a very important fuel in the transition, as the lowest carbon fossil fuel” says Chau.

The UK has recently witnessed extreme weather events, first with the heatwaves and then with resulting scenes of flash flooding - examples of how our climate is changing.

“The impacts of climate change are irrefutable,” says Chau. “The general public expects governments and large companies, like TotalEnergies, to act on this. In Europe, around 80% of greenhouse gas emissions come from energy production and consumption, so energy producers have a vital role to play.”

According to Rick Ashton, Market Development Manager at TotalEnergies Marketing UK, offering customers a range of sustainable solutions is essential in modern manufacturing.

One such solution is the increased adoption of low temperature bitumen which can be used in warm mix asphalt.

“The focus at the moment is lowering the temperature of asphalt,” Ashton explains.

“Conventional asphalt is mixed at around 180°C and that takes a lot of energy. If we can lower the manufacturing temperature by chemically modifying the liquid bitumen, we can reduce the energy demands by up to 30%.”

Representing TotalEnergies, Ashton is also working alongside industry bodies towards Net Zero carbon goals and contributing to CO2 reduction in the UK.

“The All-Party Parliamentary Group for Better Roads put together a report for all the local authorities in the country on how to support this.

“The report claims if all asphalt production in Great Britain for 2017 had been switched to warm mix asphalt, it would have saved at least 61,000 tonnes of CO2 – the equivalent of cutting almost 300 million miles of car journeys. (Citation: Working for better roads Warm Mix Asphalt: reducing carbon emissions and improving efficiencies)

“When you mix the materials 30oC lower it means products are cooler to install. This allows faster roadworks as the asphalt can cool to a point where it won’t be too soft to traffic causing deformation. You use less energy to heat the product, because a big part of the energy used in asphalt production is to get the product to a workable state. Our low temperature ECO2 bitumen, for example, allows the same workability at 140°C - or 40°C cooler.”

Ashton says that this will support road workers too. “It's a safer environment for them because they're not walking or driving through steam when there's live traffic going past just on the other side of the traffic cones.”

The TotalEnergies team conducted trials to measure the typical cooling times of asphalt. For a traditional hot mixture, a layer can typically be 100mm thick and will take two hours in normal ambient temperatures, before traffic can run on the asphalt. Lowering the temperature by 40°C can halve this cooling time.

“Our customers may only have a five-hour slot where they can get in there and actually do the roadworks on a local urban road,” explains Ashton. “If they can add an hour's surfacing into that slot or get the road open an hour quicker, it's a 20% efficiency benefit.”

National Highways who manage the motorway and trunk roads networks also estimate that an increase in shift outputs of 20% could be provided by using this technology on its network, saving up to £70 million a year. (Citation – Report, The All-Party Parliamentary Group on Highways: Working for better roads Warm Mix Asphalt: reducing carbon emissions and improving efficiencies.)

Asphalt is the most recycled material globally and like its hot mix equivalents, TotalEnergies ECO2 is also 100% recyclable back into asphalts in the future, giving further embodied CO2 reduction benefits, helping to prevent waste, and conserving natural resources as less aggregate needs to be quarried.

Styrelf® is one of TotalEnergies’ premium products. The name comes from adding a cross-linked polymer into bitumen, called styrene.

“It’s historically been used in high profile sites like at the Monaco Grand Prix Circuit and the Mersey Gateway Bridge. We perform a huge amount of research and development, both here in the UK and in Europe and the last 30 years have seen continuous improvement for these products” explains Ashton.

A new grade in development, Styrelf® Long Life, aims to delay the onset of roadworks. Historically, highways engineers have to predict how long a road will last before potholes begin to form and a road needs to be repaired.

“It’s oxidation, which makes the surface more brittle and eventually it cracks. As it cracks, water gets into the cracks, they get bigger - then you've got a pothole, which somebody needs to repair. To do that, you’re going to have to cause disruption.”

TotalEnergies is working with local authorities and those responsible for maintaining roads on this matter. To get things moving, Ashton is involved in a number of industry bodies such as being a branch Chairman of The Institute of Asphalt Technology (IAT).

Then there’s a group called the Asphalt Industry Alliance (AIA) whose purpose is to promote the benefits of asphalt. This is a joint venture between the Minerals Product Association and Eurobitume UK, the two principal bodies which represent the suppliers of the raw materials used to produce asphalt, as well as asphalt producers and laying contractors. This then feeds into central government via the All-Party Parliamentary Group for Better Roads.

TotalEnergies has a partnership with transportation and supply chain company Hoyer Gas & Petrol Logistics Limited, which provides services to the company in the form of planning, safe loading, road transport and delivery of bitumen products to its UK customers.

“TotalEnergies was Hoyer’s first client for bitumen transportation in the UK” says Chau.

“I'm proud to say that a lot of expertise, experience and procedures have been developed in collaboration between TotalEnergies and Hoyer.”

Chau states that Hoyer understands the vital ingredients for a successful partnership.

“It's strong and good quality communication that can only come through trust and mutual respect. That communication needs to be strong on all levels of management and day-to-day operations. If that communication breaks down on any one level, then things can quickly go awry”.

The next 12 months will continue to be interesting for the supply of bitumen into the UK.

In the wake of the Russian invasion of Ukraine, the government announced that the UK would sanction crudes and petroleum products of Russian origin from the end of this year.

“What that means for the bitumen world is quite significant because Russia has been important for bitumen in Europe. So this presents some challenges for the industry and supply chains need to evolve and adapt.”

TotalEnergies is moving with the times and transforming its bitumen supply chain across the UK. In the future, it is expected that more bitumen will need to be imported into the UK, potentially from further afield.

“We're extending our partnership with Navigator Terminals, a very large independent bulk liquids storage provider. We are expanding through a new position in Teesside in addition to an existing facility we have with them in London, for importation of bitumen by sea."

The combined storage of the positions will give TotalEnergies significantly more storage capacity.

In a testament to TotalEnergies’ long-term commitment to its bitumen customers, these assets will ensure TotalEnergies’ bitumen supply into the UK is truly national and resilient. 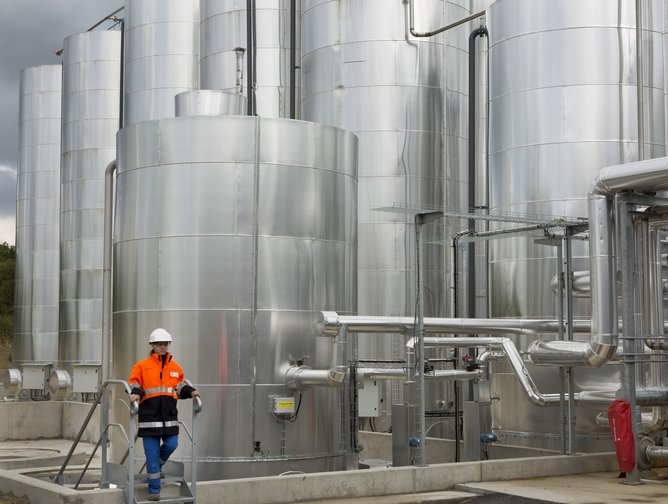 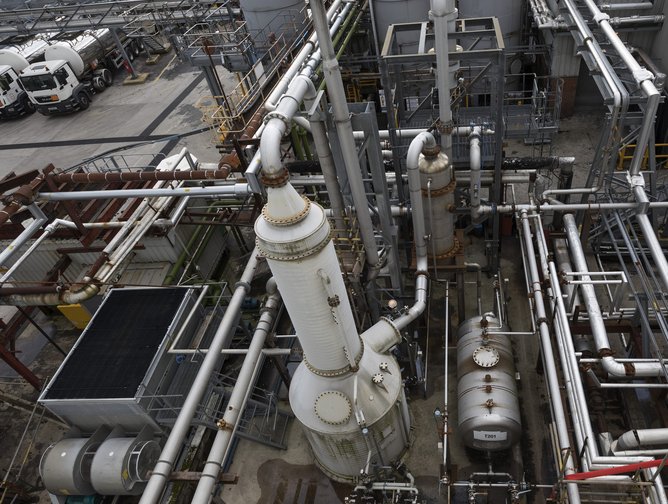 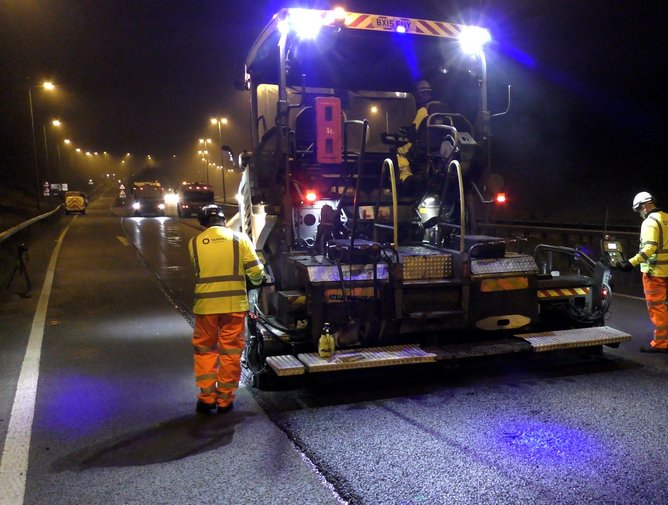 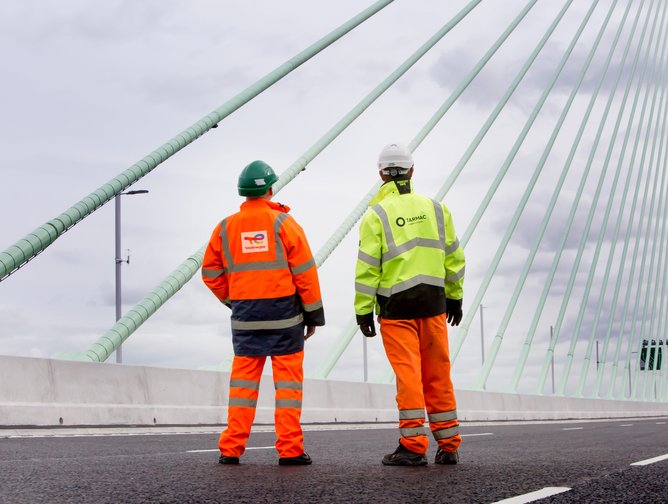 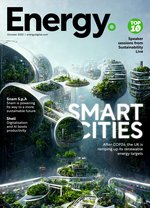