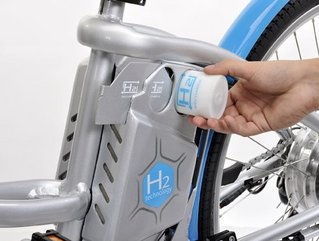 The French startup company, Pragma Industries, has become the first to start factory production of hydrogen-powered bikes for corporate or mu...

The French startup company, Pragma Industries, has become the first to start factory production of hydrogen-powered bikes for corporate or municipal fleets.

The Alpha bike can travel as far as 100km on a two-litre tank of hydrogen – matching electric bikes.

However, the time to refill an Alpha bike in comparison to the average electric bike is minimal, with the tank taking minutes to refill and batteries taking hours to charge.

The company claims that one kilo of hydrogen can hold 6000 time more energy than a one-kilo lithium battery.

At this price the technology is too expensive for the consumer market, but Pragma Industries are working on lowering the cost to €5,000 ($6,100) to keep inline with current premium electric bike costs.

“Many others have made hydrogen bike prototypes, but we are the first to move to series production,” commented Pierre Forte, Founder and Chief Executive of Pragma Industries.

The company have previously worked in making fuel cells which are sold for military use.