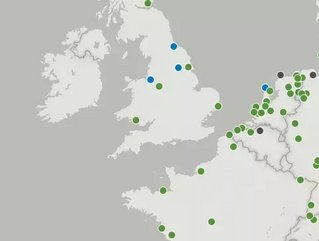 Western Europe and Asia Pacific are driving growth, but US projects are rising, according to Pillsbury Law's Hydrogen Map

Pillsbury Law has created The Hydrogen Map which tracks more than 200 blue and green projects globally.

Currently there are 57 projects operational and a further 58 will be in development by the end of 2021. Construction of another 92 are slated to begin in the next decade.

Western Europe and Asia Pacific, which account for more than 83% of known low-carbon hydrogen projects, are driving growth, but US projects are rising. The US is well positioned to lead the green hydrogen economy due to the abundant, low cost renewable energy sources needed to produce it, such as wind, solar, hydropower and nuclear, according to McKinsey.

A hydrogen production facility being built at the Tabangao refinery in Batangas, Philippines is slated to be the first to generate blue hydrogen, in which hydrogen is produced using fossil-fueled sources but the resulting carbon emissions are captured, stored or reused.

"This map will be a helpful tool for a broad audience of policy makers, industry participants and investors, sustainability analysts, advocates and journalists tracking the development of low-carbon hydrogen projects and encourage dialogue between those parties to further accelerate adoption of this transformational technology."

"With governments and enterprises worldwide increasingly prioritising decarbonisation goals, we are laser-focused on helping clients capitalise on the enormous opportunities that the ongoing energy transition presents,” said partner Sheila Harvey, who serves as firm-wide Energy Industry Group leader at Pillsbury and co-leads the firm’s Hydrogen practice.

"Green hydrogen projects, which combine renewable power sources with hydrogen production, are unlocking new possibilities for regions previously constrained by weak grid connections and transmission bottlenecks and marking a crucial step in the development of the green hydrogen business case," she said.