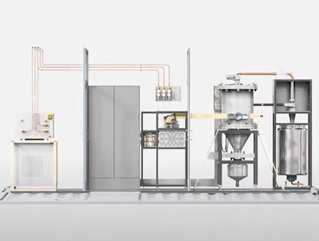 Levidian Nanosystems has struck its first customer deal to supply its Levidian LOOP10 system at a site in Abu Dhabi owned by IDC.

The agreement will see more than 500 LOOP decarbonisation systems rolled out across the UAE, together with Zero Carbon Ventures, which will focus on decarbonising waste gas on landfill and gas flaring sites, partnering with major oil and gas companies, and government agencies across the Emirates.

The deployed LOOP systems will together form a critical supply chain network producing graphene and hydrogen for distribution in the Gulf country.

A single LOOP50 device utilising waste gas reduces CO2 equivalent (CO2e) by 100 tonnes per year. Over the course of Levidian’s 10-year agreement with Zero Carbon, the 500 LOOP devices will remove half a million tonnes of CO2e.

Using Levidian’s expertise in nanomaterials and Zero Carbon’s extensive network, the graphene produced by LOOP will be used to enhance and further decarbonise industrial materials in applications like paints and coatings, plastics and composites, building materials, and battery technologies. The clean hydrogen will be used in fuel cells and heat and power applications.

Levidian CEO John Hartley said LOOP is at its most powerful when decarbonising waste gas to generate hydrogen and graphene.

"Methane is the most potent greenhouse gas and Levidian’s mission is to turn this gas into a powerful tool for decarbonisation," he said.

Zero Carbon Ventures’ mission is to scour the globe to find "world-class carbon reducing innovations" that can make a hugely positive impact in the Middle East, said CEO Martin Reynolds.

“There’s no doubt that Levidian’s game-changing LOOP devices will do just that, producing both green hydrogen and high-quality graphene, right here in the UAE. Both products in turn will have a positive impact on many industrial processes," he said.

LOOP devices are named for their approximate annual CO2e reduction potential. A LOOP50, for example, reduces CO2e by 50 tonnes per year. This amount of CO2e is doubled in applications where the input gas is from a waste source, such as on oil & gas well sites (a LOOP50 using waste gas would reduce CO2e by 100 tonnes per year). LOOPs can be deployed in standard shipping containers or into permanent infrastructure as single units or larger arrays.

Levidian is currently scaling up LOOP technology to deploy LOOP1000+.

The device uses a patented low temperature, low pressure process to crack methane into its constituent atoms, hydrogen and carbon, without the need for catalysts or additives. The carbon is locked into high-quality graphene and the hydrogen can either be used as a hydrogen-rich blend or separated and stored for use in its pure form.

Founded in 2012, Levidian is a British climate tech business whose patented LOOP technology cracks methane into hydrogen and carbon, locking the carbon into high-quality green graphene. Our world-leading Technology Centre in Cambridge also offers R&D consultancy to companies in the development of graphene-enhanced products.

Levidian’s vision is a decarbonised world powered by hydrogen and built on graphene.

Expected to launch in 2022, ACX will be established as a Recognised Investment Exchange (RIE) and regulated by ADGM. As a regulated RIE, ACX aims to offer its market participants and customers efficient trading and a regulated transparent price discovery mechanism.

HE Ahmed Jasim Al Zaabi, Chairman of ADGM, said: "As the first country in the Gulf to commit to net zero by 2050, this new trading platform is a further extension of Abu Dhabi's drive to support sustainability ambitions and underlines ADGM's focus on carbon neutrality as an international financial centre."

In its latest report, Mind the Gap: How Carbon Dioxide Removals Must Complement Deep Decarbonisation to Keep 1.5°C Alive, the Energy Transitions Commission (ETC), describes how carbon dioxide removals (CDR) alongside rapid and deep global decarbonisation can give the world "a 50/50 chance" of limiting global warming to 1.5°C.

The report confirms that all sectors of the economy can and must decarbonise by mid-century with big emission reductions in the 2020s. Cutting coal use by half and ending 70% of deforestation by 2030 are particularly important priorities.

But even given the fastest feasible path of emissions reductions, the world will need at least 70-to-220Gt of carbon removals between now and 2050 to limit cumulative net emissions to a level compatible with globally agreed climate objectives.