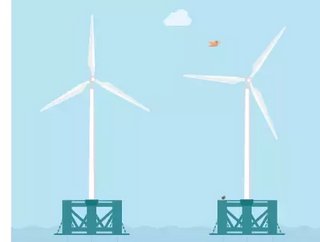 ScottishPower and Shell believe they have three key factors in their favour after placing a joint bid for floating offshore windfarms as part of Crown Estate Scotland's ScotWind Leasing, which closed submissions today.

Thirdly, the timing is right with the hosting of COP26 UN Climate Change Summit in Glasgow in November, providing ScotWind with a platform to create a new green-and-clean industry.

David Bunch, Shell UK Country Chair, said together with ScottishPower it is fully committed to working with Scottish communities and businesses to help develop supply chains and expertise which could make Scotland "a world leader" in floating wind. "At Shell we continue to grow our capacity to generate, trade and supply cleaner power to our customers and to play our part in powering the UK to net zero," he said.

ScotWind Leasing is the first round of seabed leasing for offshore wind in Scottish waters in over a decade and will grant property rights for new large-scale offshore wind project development, including floating wind for the first time. Crown Estate Scotland is expected to announce the results of this round of ScotWind Leasing in early 2022.  It is estimated that 10 new sites will eventually be chosen for wind farm developments.

ScottishPower Renewables (SPR) & Shell have signed a joint bidding agreement for the ScotWind Leasing round. The partners have 70 years’ combined experience offshore in Scotland, with over 50 years’ experience offshore in the North Sea. In addition, the partners have over 15 years of combined experience in Floating Offshore Wind. The combined ScottishPower Renewables/Iberdrola and Shell portfolio includes over 2GW of operational offshore wind, over 11GW of offshore wind in development and additionally over 700 MW of floating wind in various stages of development. SPR & Shell support the goals of the Paris Agreement and the ambitious targets of Scotland and the UK for net zero emissions by 2045 and 2050 respectively.

ScottishPower Renewables is part of Iberdrola, a global energy leader, the number-one producer of wind power. Responsible for progressing Iberdrola’s renewable energy projects in the UK, ScottishPower Renewables also manages the development, construction and operation of offshore windfarms throughout the world and currently has over 40 operational windfarm sites generating over 2.5GW of renewable energy.

This includes the UK’s largest onshore windfarm, Whitelee – which became operational in 2009 – and the East Anglia ONE offshore windfarm. EA ONE was completed during lockdown 2020 and is one of the largest offshore windfarms in the world, with the capacity to produce enough clean energy to power the equivalent of more than 630,000 homes every year.

EA ONE provided £30 million investment for new or improved operations, maintenance and port facilities across the East of England and supported almost 3,500 jobs at the peak of construction as well as 100 long-term skilled jobs at its operations and maintenance base over the lifetime of the project. More than half the project’s supply chain was provided by the UK market, with more than £75 million committed to local suppliers. A dedicated skills outreach programme engaged more than 4,200 young people in East Anglia.

ScottishPower is a Principal Partner for the United Nations Climate Change Conference (COP26) to be held in Glasgow in November 2021. It is developing an energy model that will play a significant role towards reaching the UK’s world-leading climate change targets and is investing a total of £10 billion in the clean energy generation and networks infrastructure needed to help the UK decarbonise and reach Net Zero emissions.

Shell has a long history in Scotland and today employs around 1,350 people in the North East of Scotland (as at January 2021). In 2018, Shell’s activity in Scotland created 11,700 full-time equivalent jobs and generated £775 million gross value added to the Scottish economy. Today, its business is changing and working to offer customers more low-carbon products, from renewable electricity to hydrogen.

Equinor has extensive experience with wind power in the UK, having already built and put into operation Sheringham Shoal, Dudgeon and the 30MW Hywind Scotland - as well as Dogger Bank.

The first two phases, Dogger Bank A and B, are a joint venture between Equinor (40%), SSE Renewables (40%) and Eni (20%). The third phase, Dogger Bank C, is being developed on a different timescale and is owned 50-50 by Equinor and SSE Renewables.

The three phases of the Dogger Bank Wind Farm will have a combined installed generation capacity of 3.6GW, enough to power six million UK homes. When complete in 2026, Equinor claims it will be the world’s biggest offshore windfarm.

It has identified projects representing more than 26.2 GW of Floating wind scheduled for commissioning worldwide to 2035, a number that will grow exponentially following the addition of newly sanctioned projects and their accelerated commercialisation.