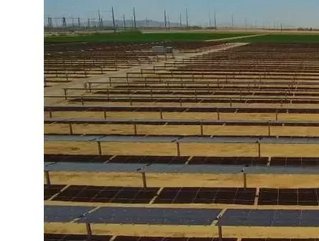 East Line Solar Plant in Pinal County expected to begin operations in December 2020, and provide $10m worth of tax benefits over 25 years...

Salt River Project (SRP) and sPower have started constucting a new solar plant which will generate $10 million in 25 years of tax revenue and up to 350 construction jobs to Pinal County, in Arizona.

Known as East Line Solar, the plant - expected to bring operations in December - will soon deliver 100 megawatts (MW) of solar generation to Intel Corporation’s Chandler facility, after receiving its conditional use permits in the City of Coolidge in 2019.

“sPower has proven its commitment to renewable energy for a sustainable future, and the City is fortunate to partner with the sPower team to expand in one of the regions fastest growing industrial and technology corridors," says Rick Miller, City Manager, City of Coolidge.

"It is also gratifying to have community partners like sPower that give back to the community and work with us on our efforts to better the environment for our citizens."

The project will provide sustained tax revenue to the local community, as well as sustainable energy at a fixed price for the 25-year contracted life of the project. The estimated tax benefits total $10 million, with the highest payments coming at the onset of project operations, which infuses substantive benefits into the local communities, according to a statement.

"We are committed to Pinal County for the long term with this low-cost, highly economically impactful project. We also seek to be a good neighbour as we develop, construct, and operate projects, and it’s important for us to integrate ourselves from the start. Recent COVID-19 relief efforts have included donations to Eloy’s Community Action Human Services and Coolidge’s Hope International Ministries," says sPower CEO, Ryan Creamer.

The development is part of SRP’s Sustainable Energy Offering, a program that gives SRP commercial customers the option to power a portion of their operations with clean, emission-free energy at an affordable price. There are now a total of 33 companies, including 21 organisations recently announced, that have signed up to receive 300 MW of solar energy provided from Arizona-based solar plants, including the sPower East Line Solar facility.

"This is a scenario that works well for all involved," said SRP Associate General Manager & Chief Customer Executive Jim Pratt. "With the East Line Solar project, we are supporting a great, locally based partner, Intel, meet its sustainability goals. We also experience many other benefits associated with utility-scale solar investment, like job creation and expansion in an environmentally sensible, growing industry."

"For more than a decade, Intel has been one of the top voluntary corporate purchasers of green power, currently supplying our US and European facilities with 100% green power. Our goal is to achieve 100% renewable energy use across our global manufacturing operations by 2030 and projects like East Line Solar help make green power more accessible to all,” he said.

The solar plant is also part of SRP’s growing portfolio of clean energy resources, which contribute to the utility’s 2035 Sustainability Goals, which aim to reduce carbon intensity by more than 60 percent by 2035 and by 90 percent by 2050 from 2005 levels.