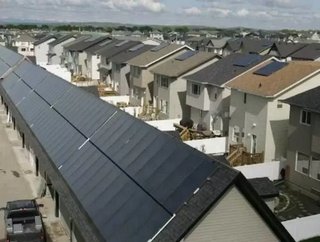 The Drake Landing Solar Community project in Alberta, Canada, wins this year's Energy Globe World Award for using an ingenious system that stores solar heat from the summer to be used to fulfill most energy needs of homes in the winter.

In the winter, temperatures drop well below freezing in the town of Okotoks, Canada. Using solar energy that is collected in underground tubes during the summer, the project was able to heat 52 homes in the winter, supplying 80 percent of the community's total energy needs. Next year, it hopes to meet 90 percent—the first residential space in the world to get most of its energy needs from solar thermal energy.

How the system works:

Competing among 1,000 other projects in some 100 countries, Doug Mc Clenahan proudly accepted the award for the project's success this week in Wels, Austria.

Across the roofs of the 52 houses are some 800 solar panels. Reportedly, the Drake Landing Solar Community has saved over five tons of greenhouse gases per home per year.