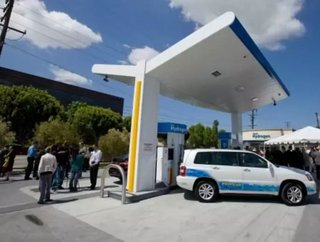 The fueling station is a test model designed to provide hydrogen fuel for Toyota fuel-cell-hybrid demonstration program vehicles.  The station will also cater to other vehicle makers’ hydrogen needs in the Los Angeles area.

Toyota owns the land that the fueling station sits atop, and leases it to Shell, who owns and operates the station.  Shell, in turn, works directly with Air Products, who provides onsite maintenance and is also responsible for providing the hydrogen pipeline.

CERAWeek 2011 in Review: Natural Gas the Solution to Oil Shortfall Mining Helium-3 will Transform the Dark Side of the Moon Types of Biofuels: Ethanol, Biodiesel, Biobutanol, and the Companies that Make Them READ THIS MONTH’S ISSUE OF ENERGY DIGITAL

“Toyota plans to bring a fuel-cell vehicle to market in 2015 or sooner, and as you see, we will not be alone in the marketplace,” said Chris Hostetter, vice president of strategic resources for Toyota Motor Sales. “Building an extensive hydrogen-refueling infrastructure is the critical next step in bringing these products to market. But infrastructure development is no easy task. It will require coordination and cooperation between vehicle manufacturers, government agencies, hydrogen producers and end users. This station, for example, is the result of years of planning and a truly collaborative effort.”

The fueling station is one of the first steps in the California Hydrogen Highway initiative.  While hydrogen infrastructure will take years to fully develop, it is a step in the right direction.  It appears that the trend in coming decades will be to have a diversified fuel infrastructure.  Compressed natural gas, hydrogen, biofuels and electric vehicle charging stations will begin cropping up across the U.S.  This is perhaps the smartest way forward.  For so long the country has been solely reliant on oil derived fuels like gasoline and diesel to meet its transportation needs.  But, as supply runs low and prices rise out of control, it is becoming more apparent that a single fuel economy is risky to say the least.  Giving the public options as to the fuel of choice is the logical step forward.