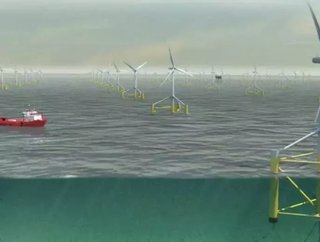 To enhance your experience, read this article in our interactive virtual reader!Click Here The wind power industry is endlessly searching for the most...

To enhance your experience, read this article in our interactive virtual reader! Click Here

The wind power industry is endlessly searching for the most powerful and steady high-speed winds to generate the most electricity for the investment.  As it turns out, deep sea conditions are some of the most ideal for wind energy generation, boasting 20 to 30 percent increases in electricity generation over close-to-shore offshore installations.  The absence of land means less friction to block the wind’s path, and thus, faster more consistent wind speed.

There are several offshore wind farms that have been constructed all over the world, but they rely on bottom-mounting to the ocean floor to hold the turbines in place.  This only allows for turbines to be erected in waters of just over 100-feet-deep.  Floating wind turbines, however, offer a unique solution to access deep sea wind power, and have the added benefit of less visibility from land—a key complaint about offshore wind farms, particularly along popular tourist coastlines.

Some of the industry’s top companies, and some lesser-known, are spearheading the race to develop the ideal floating wind turbine design.  Let’s take a look at some of the most promising developments in the wind power industry’s newest and most challenging frontier.

Blue H Group Technologies Ltd was the first to successfully deploy an operational floating wind turbine platform.  In 2008, a Blue H prototype was installed 21 kilometers off the coast of Italy in 113-meter deep water.  The design utilized a tension-leg platform with a two-blade turbine mounted to it.  Two blades allow for a higher tip speed (wind speed that results in tilting) than three blade turbines, and in deep water locations the excess noise common to two-blade turbines poses little problem.  The company is planning to develop a 38-unit deep sea wind farm in the same location as the prototype.

Another floating platform design, the WindFloat—designed by Principle Power—is being tested in Fall 2011.  A Vestas V80 2MW turbine will be mounted to one of three columns that comprise the platform’s triangular base.  Four stabilization cables attach to the columns—two attach the column holding the turbine.  The asymmetric mooring design increases stability and reduces motion.  Pumps also regulate water level in the column chambers, further adding to stabilization capability.  Principle Power is developing the WindFloat in a joint venture with WindPlus, and Vestas turbines are to be the standard for the overall system.

In the North Sea off the coast of Norway rises Hywind, the world’s first large-capacity operational deepwater floating turbine.  Hywind features a 2.3-megawatt Siemens turbine mounted on a 100-meter cylinder filled with water and rocks that is attached to the ocean floor by three mooring lines.  Oil and gas technologies developer Technip developed the floating cylinder and Norweigen offshore oil and gas company Statoil owns the Hywind installation, which it has operated and monitored since 2009 as a test model for future commercialization of the floating turbine.

WINFLO is being designed in a collaboration between DCNS shipbuilding, SOFRESID (a subsidiary of SAIPEM oil and gas), and wind energy company NASS&WIND.  The design is a lightweight platform and high-strength turbine housing that can withstand the rough conditions in deep sea offshore environments.  WINFLO’s lightweight design will allow it to be transported to and from offshore destinations via towboat, saving time and money versus offshore assembly.  Initial designs will have a 2.5 MW capacity per unit.

Still in the early phases of development, Nautica Windpower’s unique design offers a 75 percent weight reduction compared to competitors’ designs based on oil and gas platform technology.  Unlike the multi-chamber floating platforms being developed by WindFloat and WINFLO, Nautica Windpower’s design encourages movement instead of stressing stability.  Taking a lesson from tall-standing natural structures like trees, the company’s floating turbine actually bends with wave and wind activity.  It is also a downwind two-blade design, which reduces tip speed.  Since the design requires only one mooring line per unit, unlike competitors’ multiple lines, there is less environmental impact on the seabed as well.

SWAY is another floating wind turbine design intended to allow for movement, as implied by the name.  Renewable energy company Sway AS has developed the SWAY design as a floating tower module that will allow buyers to mount any type of turbine to the tower’s top.  The company, however, has recently entered into a partnership with Areva-Multibrid to use its large turbines—ranging from 2.5 to 5 MW—throughout the beginning phases of development.