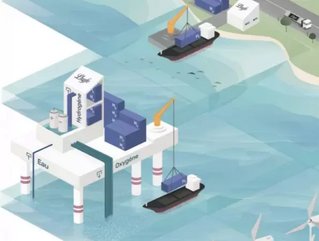 Lhyfe's Bouin site produces 300kgs a day, but will ramp up to a tonne a day in the coming months

Lhyfe has inaugurated its first production site in Bouin (Vendée), believed to be the first in the world to produce renewable green hydrogen using wind power on an industrial scale. The company has confirmed around 60 projects throughout Europe.

To support the expansion, Lhyfe secured €50 million in a Series A financing round and welcoming SWEN Capital Partners and Banque des Territoires onboard alongside its original investors. The funds will go towards supporting Lhyfe's development in France and abroad, strengthening its teams and funding R&D and new projects.

Lhyfe is now producing the first renewable green hydrogen in the world made using an electrolyser powered directly by wind turbines, and in industrial quantities (up to a tonne a day) - which represents a major technical achievement.

The site currently produces 300kgs a day, but will ramp up to a tonne a day in the coming months.

Lhyfe's hydrogen will supply four refuelling stations in western France including La Roche-sur-Yon, which will be operational in the next few days. Around 50 heavy vehicles, buses and refuse collectors will be powered by renewable green hydrogen in Loire-Atlantique, Sarthe, and Vendée at first, then in other French departments, under the VHyGO project in particular.

Matthieu Guesné, CEO and founder of Lhyfe said: "A year after laying the foundation stone, we are extremely proud to be launching this site, which is symbolic of course for us, but also for what it represents for energy transition. Our gratitude goes to our five initial partners, who have made this "mad" project to change our energy model possible. Now we have succeeded this first step, we are ready to move faster."

AquaVentus unites international industry leaders with a shared vision for advancing hydrogen's role as a low-carbon, affordable energy solution-combining their unique expertise to make that future a reality.

"McDermott brings a long history of thinking differently about energy delivery - and unrivalled expertise in offshore infrastructure - to this dynamic group of visionaries," said Samik Mukherjee, Executive Vice President and Chief Operating Officer. "This is a critical piece of the puzzle as we work together to make offshore production of green hydrogen a reality."

AquaVentus aims to develop 10GW of generation capacity for green hydrogen from offshore wind turbines in the North Sea by 2035.