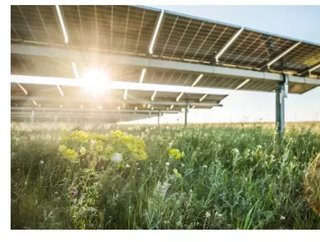 Around 615,000 bifacial solar panels have been installed, over 650 hectares of land, at Lightsource bp's first Spanish project

Around 615,000 bifacial solar panels have been installed, over 650 hectares of land on multi-row tracker technology enabling the panels to follow the sun, maximising energy generation efficiency. In addition, two overhead transmission lines at 18km and 20km were constructed to efficiently deliver the solar power into the local network.

The five-project cluster was constructed safely during the COVID-19 pandemic and commercial operation recently began. The total power output will be supplied to bp’s European power trading team under a long-term Power Purchase Agreement (PPA).

Fernando Roger, Country Head for Lightsource bp Spain, said the connection of its Vendimia project demonstrates the resilience of solar. "We had to face many challenges due to the COVID-19 pandemic, but our team and trusted partners remained focussed, and now we have completed our first project in Spain. We would also like to extend a special thank you to all the landowners involved for their continued support on this project.

Felipe Arbelaez, senior vice president for zero carbon energy bp said: “It’s fantastic to see the safe start-up of this first project in Spain, and for Lightsource bp to achieve an impressive 3GW pipeline in just two years. Through disciplined investment and safe execution, we are delighted to see the next chapter of bp’s energy story in Spain come online.  This project is also a great example of the power of bp’s integration capabilities as our expert power trading team will offtake the power generated, supporting the financial stability of the project and meeting bp’s strict returns threshold.”

The construction process was handled by Lightsource bp’s appointed contractor, Prodiel (an Andalusian engineering, procurement and construction company) and over 600 local jobs were created during that time. Prodiel will continue to maintain the solar cluster under an Operations & Maintenance agreement for the next two years.

At the opening ceremony, Carlos Barassa, head of country for bp Spain, said: "The Vendimia solar project that we are inaugurating today in Zaragoza is great example of the fulfillment of bp's ambition in its transition to an integrated energy company, and our contribution to building a low-carbon future."

Earlier this month bp announced it will buy 9GW of solar development projects in the US from independent solar developer 7X Energy.

bp will pay 7X Energy $220 million for the projects and 1GW of 'safe harbour' equipment and expects the acquisition to complete in 30 days. The projects, spread across 12 states - with the largest portfolios in Texas (ERCOT) and MidWest (PJM) - are expected to meet bp’s low carbon investment criteria, generating returns of at least 8-10%.