A Nano-Approach to Solar Rivals the Entire Market 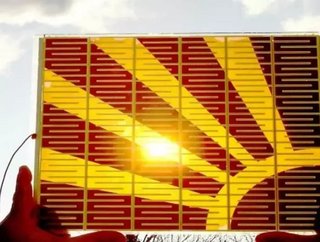 The solar scenario over the last few decades has historically been dominated by silicone-based solar cells. Today, over 80 percent of the manufacturin...

The solar scenario over the last few decades has historically been dominated by silicone-based solar cells. Today, over 80 percent of the manufacturing infrastructure around the globe is dominated by silicone—the bulk of it now in China. Of course, China's solar manufacturing strategies are a huge part of the shift we're seeing in the market today as others suffer through a glut of materials on the market and rapid crashes in prices of solar cells.

Why is silicone dominating? For one, it's an abundant material, coming from sand. Out of the different types of silicone used, the end results can create cells with efficiencies of up to 20 percent, claiming around $1 to $1.10 per watt. Others are pursuing thin-film technologies, which have much lower cost structures of around 70 to 80 cents per watt, but only exude efficiencies of around 10 to 13 percent. Other manufacturers have played around with other ideas like organic photovoltaics, but have yet to reach stable efficiencies at a low enough cost.

Meanwhile, a small team of experts who have been watching the market and landscape of the solar industry since its early beginnings have come together to develop a revolutionary idea. Using nanostructure-based coatings, Magnolia Solar is working on a concept that would allow for the full absorption of all light, boasting efficiencies of 15 to 20 percent as low as 50 cents per watt—the lowest on the market. NASA, the US Air Force and the National Science Foundation have already begun funding the research and pilot programs pushing this unique concept. Though similar technologies are used for defense applications, Magnolia's mission is to bring it into the commercial market by developing them more at significantly lower costs.

To boost efficiencies of solar cells, Magnolia employs nano/macro materials that can absorb more than just visible light, but also ultraviolet and infrared. “There is no trick,” says Magnolia Solar CEO Dr. Ashok Sood. “The efficiency of a solar cell is nothing more than a voltage, a current, how large of a voltage you can get and how much current you can absorb. In order to get a higher efficiency, we're trying to pick up other parts of the spectrum.”

That will certainly have important implications for places that aren't exactly known for their sunlight and rely heavily on exported sources of oil and gas. Right now, solar energy is a multibillion dollar market, yet still only accounts for less than one percent of the total global energy portfolio. Despite recent politics surrounding—especially Solyndra's bankruptcy—solar is becoming more mainstream, and some of the biggest and richest players like Warren Buffet are investing heavily, as the market's enormous potential becomes more obvious.

“Politicians have done more damage to the solar industry than it deserves,” says Dr. Sood. While the venture capitalists who invested half a billion dollars into a company—without having thoroughly thought out the cost structure of the market—should have known better, the public doesn't flinch when big oil companies get billions of dollars in tax subsidies.

But every new technology requires some investment and subsidization. Solyndra was just a case of a bad investment, which is bound to happen in the infancy of an industry. No one predicted that China was going to swoop in, either. That's why it's also imperative the US enforce a stronger energy policy. Otherwise, “China will eat our lunch,” says Dr. Sood, “and they already are.”

Having worked in defense for a very long part of his career, Dr. Sood argues that if only a fraction of the over $700 billion the country has invested into the Iraq war was put into the infrastructure for solar manufacturing among other renewables and domestic resources, “we would be so much further ahead.” China, now investing just $25 to $30 billion a year into solar, comparably, now trumps the market, and it is unsure if the US will be able to catch up.

Despite the financial crisis, lack of investment and cost pressures the Chinese manufacturers have put on the entire sector, the only way a solar company can be competitive is to meet demand in a way that is more efficient and cheaper at the same time.

“I think we could very easily provide more than 20 to 25 percent of our electricity needs over the next decade using solar,” says Dr. Sood. As some of the biggest investors continue to pursue these projects, it's clear that the industry is still about to take off. As Solyndra and others have fallen, the attention the solar industry has received may actually begin working in its favor as we watch the industry begin to turn around—but really, it's just getting started.