The practicalities of introducing carbon taxes 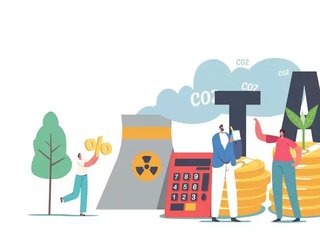 Christy Wilson is an associate and Ugo Onwumelu is a trainee solicitor at Katten Muchin Rosenman UK. In this column, they explain the merits and pitfalls of introducing carbon taxes in key jurisdictions globally

Carbon tax is used as a tool to help discourage polluting activities. The framework of a carbon tax is that it sets a rate that emitters of greenhouse gases must pay for each tonne of emissions. A number of countries and groups of countries across the world have introduced or tried to introduce some type of carbon tax but a common global approach to the implementation and enforcement of a carbon tax would certainly have a far more positive environmental impact.

Whether at a global or country level, carbon tax can be controversial due to the fact that it is essentially taxing activities that were previously tax-free, therefore people can be opposed to its imposition. Furthermore, many countries across the world have built their economy on carbon-producing activities. As such, a carbon tax could leave some countries needing to seriously re-think the operation of their entire economy.

As one of the world’s largest carbon emitters, the United States has shown some resurgent commitment to fighting climate change since Joe Biden became president in 2021. The administration’s Clean Electricity Performance Program (CEPP) that would force power companies away from fossil fuels includes more than $500 billion in climate measures.

Even though the CEPP includes clean-energy tax credits, it rules out the idea of a carbon tax. This is likely influenced by Republican resistance to the imposition of carbon tax due to the typical Republican supporter base as well as lobbying pressure. When the Obama administration proposed a national carbon tax or a cap-and-trade scheme to help reduce carbon emissions in 2016, it received severe backlash from US Congress, including a non-binding measure denouncing a carbon tax by Congressional Republicans.

At the moment, only a few subnational carbon initiatives are implemented in the US, namely a cap-and-trade programme in California and an emissions trading scheme (ETS) in Massachusetts.

The tension around the topic of carbon tax in the US is an indication of how controversial such a tax is. Even though we are in the midst of a climate crisis, there is still significant debate about how environmental matters should be taxed.

Southeast Asia’s largest economy, Indonesia, became the fourth country in Asia to introduce a carbon tax in October. The carbon tax introduced at a minimum rate of (US$0.0021) per kilogram of CO2 equivalent (CO2e) was less than half of the originally proposed rate and will come into force from April 2022.

However, the introduction of the carbon tax is against a backdrop of millions of dollars spent in electricity subsidies. For example, this year, the Indonesian government has spent US$4.32 billion on electricity subsidies, which has prompted some analysts to suggest that the carbon tax is likely to affect electricity prices. Although, the carbon tax revenues would likely be used to facilitate the transition toward renewable energy in Indonesia, it may, however, affect the competitiveness of Indonesia’s market (e.g. manufacturing) which has historically been based and established on carbon usage.

On the first day of its opening on July 16, the market saw 4.1 million tonnes of carbon dioxide quotas worth US$32 million traded. It is likely China will push for more market-based mechanisms to help lower carbon emissions rather than introduce a carbon tax because, while China accounts for 14 per cent of Europe’s steel imports, a carbon tax could force its steel manufacturers to relocate to other neighbouring countries, and potentially lead to a rise in unemployment.

As part of its Green Deal, the European Commission has proposed the world’s first carbon border tax, known as a carbon border adjustment mechanism, which will place a levy on imports of materials such as steel from nations and foreign companies with relaxed environmental rules. The proposal has attracted criticism from many EU trading partners.

For example, Russia, which is Europe’s biggest supplier of carbon-intensive products, such as steel and aluminium, has claimed it could lose up to USD$7.6 billion due to the proposal. Although the proposal is still undergoing negotiations this border tax has the potential to attract retaliatory policies from opposing countries such as Russia which could jeopardise the implementation of the tax.

In order to have a global agreement on carbon tax, it will have to be driven by the Organisation for Economic Co-operation and Development with the support of the G7 or the G20. As we saw with the global minimum tax agreement, there is such diversity of opinion on taxation across the world that it can often be hard to arrive at a consensus.

This was demonstrated recently at the COP26 conference where world leaders had the opportunity to make bold and significant strides towards a net zero planet, yet many commentators felt that the politicians missed the mark.

Concerns about the imposition of a carbon tax are compounded when we think about its implementation on a global scale. For example, certain lobbyists in the US have tried to create obstacles for the creation of a carbon tax there, but a global carbon tax would create an even greater and more divergent set of opinions and pressures.

Linked to this, there are often disagreements between countries when they discuss the burden-sharing of the climate crisis. Politicians may feel that it is unjust to impose a carbon taxation on its citizens if, as a country, they are not a significant contributor to greenhouse gas emissions.

Ultimately, it is likely that any action in relation to carbon taxes is going to be limited at national or regional levels for now.