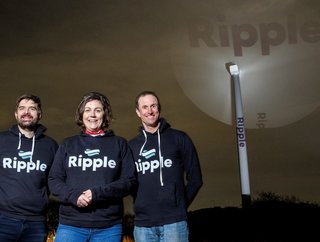 Ripple Energy has marked the opening of what is billed as the UK’s first consumer-owned wind farm with a light show which projected the names of the turbine's owners onto its tower.

The turbine enables customers to own their own source of low cost, stable priced green power. At a time of record breaking energy prices and as the Ukraine war leads people look for ways to become less dependent on imported energy, owning a source of stable priced, home grown green energy is a simple, ready-made solution to both.

Sarah Merrick, CEO of Ripple Energy, said: “This project demonstrates how wind farm ownership can free consumers from volatile, high energy prices and dependence on imported energy. Ripple’s 907 members will be generating their own low cost, green energy for the next 25 years. This shows better energy solutions, that give people real power, are available today.

“It is an emotional moment and one that we’ve been waiting for since we founded Ripple in 2017. Our members believe passionately in the power of green energy. This is their wind farm; they’ve made it happen; they’ll get its electricity. Projecting their names onto the turbine feels like wonderful recognition of what they’ve achieved.”

Ripple estimates owners will see average annual savings of around 25% on their energy bills across the turbine’s 25-year lifespan. Current high prices mean the average Graig Fatha owner is set to save £340 over the coming year. Most members own enough of the wind farm to meet their entire homes’ consumption. The wind farm as a whole is set to save 1.1 million kg of CO2.

Customers that join Ripple by buying shares in a wind turbine get the power it generates, delivering savings on every electricity bill for the turbine’s life. In light of the current volatility in energy prices across the UK, which are expected to stay high for a number of years, Ripple’s unique proposition offers customers price stability through access to the UK’s cheapest source of electricity – onshore wind. When energy prices are energy prices are high, savings for members are high.

“With energy prices at their highest in a generation, now is the perfect time to own your own source of low cost, green power," added Merrick.

"By owning a wind farm you can reduce your energy bills and stabilise them for the long term. Fortunately, there is still time to do just that by signing up to be a part of our second wind farm in Scotland, which is open for members today.”

Consumers can choose how much of a wind farm they would like to purchase, starting at as little as £25. Part-owning a wind farm can not only bring benefit from significant savings off their bills, but Ripple members have the confidence they are helping create a greener electricity grid by directly increasing the UK's renewable energy capacity.

Alongside the 907 members' shares, the Graig Fatha development was supported by a £1.1mn grant by the Welsh Government. Income generated from the Welsh Government’s supported portion of the wind farm will be channelled towards initiatives supporting people facing fuel poverty in the local area, through the wind farm’s Community Benefit Fund (CBF).

Michael Chamberlain, a Ripple member, said it is a pioneering model that facilitates individuals and families to directly join with others to collectively reduce or eliminate their carbon footprint by co-investing in a source of renewable energy.

"It is also the first option that separates the home from the generation which makes it accessible to more people," he said.

The electricity generated by the Graig Fatha wind farm is sold to Co-op Energy, powered by Octopus, which subsequently supplies the owners with discounted electricity. The discount is based on how much energy it generates, electricity prices and the amount of the turbine owned by the customer.