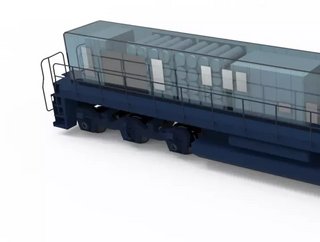 The partnership with Operail is planned in two phases. Initially, a prototype of a fuel cell electric locomotive will be constructed by the end of 2022. In the second phase of the project, the parties intend to convert an additional 40 locomotives to fuel cell power. Each converted locomotive will save 370 tonnes of CO2 emissions per year, equivalent to the annual emissions of 80 average passenger cars.

Rainer Küngas, Chief Technology Officer at Stargate Hydrogen, said: “Retrofitting ageing diesel locomotives to zero-carbon alternatives is already an economically sustainable solution and will be even more so in the future. Retrofitting also allows the reuse of existing diesel-electric locomotives that would otherwise end up as stranded assets once they no longer meet future emission standards.”

Raul Toomsalu, Chairman of the Management Board at Operail, said it has focused its activities on environmental sustainability.

"In Estonia, this is achieved via electrification of the main railway lines, but this does not resolve the issue of emissions in shunting operations. The team at Stargate Hydrogen has outstanding international experience and world-class technological capabilities, while our professionals at the Tapa depot have the skills and knowledge for building modern locomotives. As a result of this collaboration, we can offer innovative and environmentally sustainable solutions in all our target markets.”

Henrik Hololei, Director-General for Mobility and Transport at the European Commission, said even if rail is already largely electrified, energy-efficient and our most sustainable transport mode, it is certainly no time to be complacent. Around 20% of engines in the EU still run on diesel.

"There is no doubt that we need innovative solutions to enable the wider use of alternative fuels such as green hydrogen," he said. "We are keen on exploring, together with Shift2Rail and Fuel Cells Hydrogen Joint Undertakings, how fuel cell and hydrogen can be integrated into rail operations and how to turn ideas into actual projects and applications.”

The completion of the first hydrogen locomotive prototype is planned for the end of 2022.