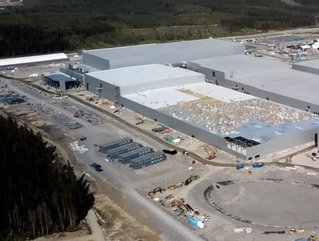 Total financing in Northvolt has risen to $6.5 billion after $2.75 billion was raised in equity.

The latest equity - fuelled by new shareholders such as Sweden's AP1-4 pension funds and Canada's OMERS alongside Goldman Sachs Asset Management and Volkswagen Group - marks a key milestone in Europe’s industrial ramp up to achieve European Green Deal objectives, according to EIT InnoEnergy.

The capital will enable Northvolt to expand its Swedish gigafactory, Northvolt Ett, from 40 to 60 GWh of annual capacity to meet increased customer demand, and production will start later this year.

Diego Pavia, CEO of EIT InnoEnergy, said Northvolt represents a cornerstone in Europe’s ambition to create an annual €250 billion battery value by 2025, and is a leading example of how Europe can create new industrial value chains.

“The European Battery Alliance brings together more than 600 industrial, financial and innovation actors with the objective to build a strong, sustainable and competitive European industrial battery value chain, from mining to recycling. By facilitating collaboration between mission-driven businesses and public institutions on this key energy transition challenge, we Europeans are succeeding in our endeavour to deliver the European Green Deal. Relevant achievements include the number of EVs sold in Europe in 2020 (1.365 million) being triple that of the US, and the investments captured (€60 billion) almost three times that of China.”

Peter Carlsson, co-founder and CEO of Northvolt, said: “We have a solid base of world-class investors and customers on-board who share Northvolt’s mission of building the world’s greenest battery to enable the European transition to renewable energy.”

Alexander Hartman, CFO of Northvolt added this is a new European industry in the making and it will require significant investments over the coming decade. "It is encouraging to see that the investor community has identified the opportunity early, and we hope to see more investments throughout the value chain over the coming years," he said.

Northvolt has to date secured in excess of $27 billion worth of contracts from key customers, including BMW, Fluence, Scania and Volkswagen, to support its plan, which also includes establishing recycling capabilities to enable 50 percent of all its raw material requirements to be sourced from recycled batteries by 2030.

Fluence, a leading global energy storage technology, software and services provider, has signed an agreement to co-develop next-generation battery technology for grid-scale storage applications and it will buy battery systems from Northvolt.

A key challenge in the industry's boom will be battery recycling. The World Economic Forum’s Global Battery Alliance (GBA) is a public-private collaboration of organisations which argue that a circular battery value chain is a key way of realising the Paris Agreement’s 1.5C climate goal in the transport and power sectors.