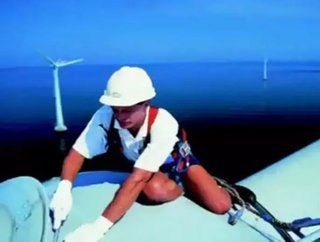 Written By: John Shimkus Denmarks Vestas&mdash;one of the most recognized names in the wind industry, and the worlds largest wind turbine manufacturer...

Denmark’s Vestas—one of the most recognized names in the wind industry, and the world’s largest wind turbine manufacturer—has announced the creation of its newest turbine design: a 7 MW behemoth.

The new offshore turbine is designed to withstand the most brutal of weather and sea conditions. With a rotor diameter of 190 yards, the giant turbine competes with some of the biggest wind turbines in existence today.

Vestas unveiled the new 7 MW turbine this week at a news conference in London. Thus far, the company is developing the initial prototype, but expects commercial production of the giant turbine to begin by 2015. Vestas has its eyes set on contracts for several upcoming planned wind farms off of the coasts of the UK.

"Seeing the positive indications from governments worldwide and especially from the UK, to increase the utilization of wind energy is indeed very promising," said Vestas Chief Executive Officer Ditlev Engel. "We look forward to this new turbine doing its part in making these political targets a reality."

Vestas newest design uses a traditional geared machine drive versus a direct-drive. While direct-drive systems hypothetically require less maintenance, they are less cost-effective, and Vestas’ decision to use proven geared machine technology will offer customers the lowest cost option in large-scale offshore turbines. The problem with this decision, however, is that maintenance costs over the long-run could potentially be higher than with a direct-drive system, which has far less moving parts.