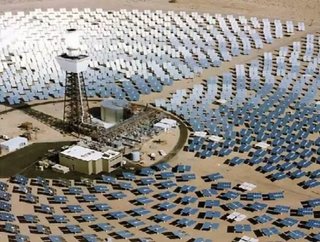 “Completion of the solar power tower is a significant milestone not only for SolarReserve and our plant, but also for the solar energy industry as a whole. This project is on track to bring American innovation to fruition and is already creating jobs,” said Kevin Smith, CEO of SolarReserve. “Our U.S.-developed technology has the ability to store energy for 10-15 hours and solves the issue of intermittent power generation to the grid, the number one limitation to other solar and wind renewable energy technologies. We can deliver electricity ‘on demand’ the same way a coal, natural gas or nuclear fueled plant does – but without emitting any harmful pollution or hazardous materials – providing a genuine alternative to conventional power generation.”

The flagship project is jointly owned by SolarReserve, ACS Cobra, a worldwide leader in the engineering and construction of power plants and solar thermal facilities, and Santander, a global financial services and banking leader. ACS Cobra’s Nevada-based affiliate, Cobra Thermosolar Plants Inc., is the general contractor for the project and is utilizing Nevada and regional subcontractors to perform the work.

“We are pleased to be partnering with SolarReserve and Santander in constructing the world’s leading solar technology,” said Jose Alfonso Nebrera Garcia, Director General of ACS Cobra. “SolarReserve’s molten salt power tower technology will change the face of solar thermal power as the world knows it, and we are excited to help implement this important technology in Nevada.”

Construction of the facility began in September of 2011 and currently has over 100 workers on site. More than 70 percent of the construction workers are local Nevadans and 80 percent of the subcontractors are Nevada-based, including union and non-union firms. Construction is expected to peak at more than 600 jobs on site during the 30-month construction period and is estimated to create more than 4,300 direct, indirect and induced jobs at companies throughout the U.S. that provide engineering, equipment supply and manufacturing, transportation and other value-added services. To date, orders for the project have been placed for equipment and services in more than 20 states.

The Crescent Dunes project has secured a 25-year power purchase agreement with NV Energy and will provide clean power to approximately 75,000 homes when complete. The project closed financing in September of 2011 utilizing private equity investment from SolarReserve, ACS Cobra and Santander along with support from the US Department of Energy’s loan guarantee program.

“NV Energy is committed to supporting renewable energy development in Nevada and is pleased to be working with SolarReserve on the Crescent Dunes Energy Plant,” said Michael Yackira, President and CEO of NV Energy. “We congratulate SolarReserve on this milestone and look forward to bringing our customers clean, reliable electricity from one of Nevada’s greatest resources – the sun.”

Once operational, the project will expend more than $10 million per year in salaries and operating costs, and is forecasted to generate $47 million in total tax revenues through the first 10 years of operation – contributing to workers’ paychecks, service businesses, local school systems and police and fire departments.

The project is being constructed on federal land operated by the Bureau of Land Management. In November 2010, Interior Secretary Salazar signed the project’s thirty-year right-of-way and approval to construct. The plant is expected to be operational by the end of 2013.