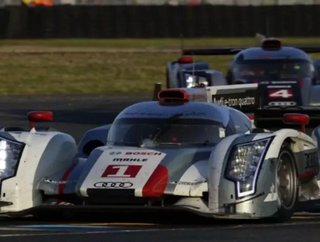 Audi's 200-mph R18 e-tron quattro won this year's Le Mans race Sunday, marking the first time a hybrid racing car has ever won the world's most famous endurance race. In what has been nicknamed the “Electra,” driver André Lotterer traveled 3,201.18 miles over 24 hours—roughly the distance from Miami to Seattle.

Both Audi and Toyota entered two hybrids in the race, competing to see which would most successfully endure a twisty 8.5 mile course through France—the ultimate engineering test. As one of the most watched car races on the planet, the Electra crossed the finish line in front of some 240,000 fans.

Taking the top spot for the 11th year in a row, Audi also posted the fastest lap at 3 minutes and 24.189 seconds, an average speed of 149.315 mph. Energy harvested from a fly wheel while braking was fed into an electric motor to power its front wheels.

As for Toyota, results could have been better. By hour five, a Ferrari nudged driver Anthony Davidson in his Toyota, throwing the car off course in a wreck that left Davidson with two broken vertebrae. He was carted off the track by ambulance, but is expected to make a full recovery.

"Lying in a French hospital with a broken back wasn't what I had in mind at this stage in the race," he later tweeted.

Toyota's second car ran into some mechanical problems and suffered a minor crash by hour 11. Although things didn't go as planned for Toyota, the company is not too surprised given the circumstances. Delayed by the March tsunami and nuclear disaster, the team wasn't able to start working on its cars until September.

"This is a learning year for Toyota Racing," team president Yoshiaki Kinoshita said in a statement.

Bottom line, the fact that a hybrid won is a major accomplishment in the green tech world. And as for Toyota, the company says it will return next year with a vengeance. Fans are already getting pumped for next year's showdown: Audi vs. Toyota, hybrid vs. gas-guzzler.