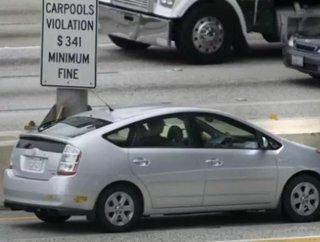 It must have been nearly a decade ago now. I was entering college in San Diego and commuted on the highway to get to school. Amidst terrible southern C...

It must have been nearly a decade ago now.  I was entering college in San Diego and commuted on the highway to get to school.  Amidst terrible southern California traffic, I noticed that the new hybrid vehicles I’d seen in cheeky TV ads, such as the ever-so-popular Prius, were happily cruising in the HOV carpool lane with only a single driver.  To my surprise, I later learned that those who were taking a chance on the new environmentally friendly technology were being rewarded through a statewide incentive program that allowed hybrid vehicle owners unlimited access to HOV carpool lanes, with or without a second passenger.  All they needed was a small yellow sticker on the back of their cars that read, “Access OK, California Clean Air Vehicle.” Now, nearly a decade later, that privilege is coming to an end.

"On July 1, 2011, hybrid vehicles carrying the yellowsticker will no longer be allowed to operate in an HOV/carpool lane unless the minimum passenger requirements are met. This expiration date will not be extended," states the California DMV.

California lawmakers believe that at this day in age of ever-rising gasoline prices, drivers no longer need incentives to increase their fuel efficiency and reduce emissions.  There was a brief period when the state stopped issuing the yellow stickers permitting HOV access to hybrids, and used vehicles that already had the stickers sold for more than brand new ones!  Which, shows just how popular the incentive program was.

But California lawmakers aren’t completely throwing out the idea of incentives for more fuel efficient, low-emission vehicles.  The California DMV has also released a statement saying, "A new Green HOV sticker program will be in effect as of January 1, 2012, to promote the use of the next generation of hybrid and other technologies."

Some vehicles currently on the market, such as electric and natural gas cars and trucks, may qualify for a white sticker permitting single-occupancy HOV carpool lane access through January 1, 2015.  So perhaps it’s time to trade in that old clunker 1st generation Prius for the new 3rd generation.  Plug-in hybrid/electrics, all-electrics and compressed natural gas are the vehicles of the 2010s… so get with the times, and jump back into that HOV lane with or without a companion!