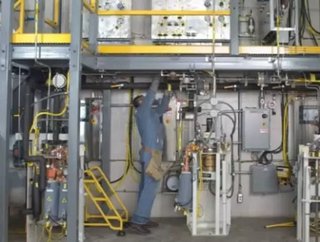 The United States has some of the highest recoverable natural gas reserves in the world thanks to the controversial hydraulic fracturing process that b...

The United States has some of the highest recoverable natural gas reserves in the world thanks to the controversial hydraulic fracturing process that breaks shale rock formations to release the energy source.  However, existing vehicle infrastructure relies on liquid fuel to run the millions of cars and trucks on U.S. roadways.  While there are natural gas vehicles being manufactured, they are slow to catch on and distributed fueling infrastructure is lacking.  To resolve this dilemma, Carbon Sciences Inc. has developed a breakthrough technology that transforms natural gas and carbon dioxide into gasoline, which may help reduce foreign oil dependence.

"The world is running out of cheap, easy oil," says Carbon Sciences CEO Byron Elton. "The current system of providing transportation fuels is flawed and unsustainable. Natural gas is abundant, affordable, cleaner and with our technology can provide all the gasoline and other transportation fuels we need without buying a teaspoon of foreign oil."

Carbon Sciences’ technology combines natural gas and carbon dioxide into a synthetic gas (syngas) that can be transformed into gasoline using the Fischer-Tropsch gas-to-liquids process, also known as “dry reforming.”  The company has solved the problem that has faced natural gas to gasoline ventures in the past, namely the inability to achieve the desired dry reforming.

Elton adds, "We believe that the U.S. can only achieve energy security by using our own resources. Combining the country's abundant supply of natural gas with our breakthrough technology to produce low cost syngas to make vast quantities of transportation fuels using mature FT technology is the answer. This is a game changer."

The company’s process has proven a high-conversion efficiency for more than 2,000 hours of laboratory testing and more than 1,000 hours of commercial testing.  The company claims that its reaction catalyst is the most robust dry reforming process for methane to date.  An added benefit to the process is the use of carbon dioxide in the conversion process, which may serve as a way to recycle the climate-changing compound rather than releasing it into the atmosphere (at least until it's burned in an engine).