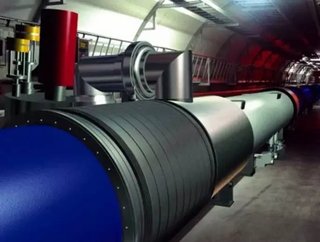 The scientific community is about to be turned on its head as researchers at the CERN large hadron collider in Europe scramble to check their work in a...

The scientific community is about to be turned on its head as researchers at the CERN large hadron collider in Europe scramble to check their work in an experiment that has apparently broken the laws of modern physics.  Scientists working at the facility have discovered that subatomic neutrino particles may have traveled through the 17-mile (27 kilometers) long particle collider at faster than the speed of light.  The only thing is… nothing can travel faster than the speed of light.

The father of modern physics, Albert Einstein, formulated his “Special Theory of Relativity” based on the fundamental law that nothing can move faster than the speed of light, 299,792,458 meters per second.  If the CERN experiment proves to be accurate, than Einstein’s theories, which have paved the way for countless technological advances in the last century, may only be scratching the surface of a much more complex physical nature of our reality.

In recent decades, quantum physics, or the physics of the subatomic level of reality, has propagated new and exciting theories, including the existence of worm holes, multiple dimensions and the realities of time travel.  In fact, the whole purpose of CERN’s research is to try to collide particles at high speeds to eventually isolate and prove the existence of the Higgs boson particle, also called the “God particle.”  This is theorized to be the smallest particle in existence.  It is deduced that this particle may hold clues to what exactly is the strong force, the extremely powerful attractive force that operates at the subatomic level holding together particles of the same polarity that should otherwise repel one another (think magnets repelling one another).

In their pursuit of the Higgs boson particle, however, these researchers have been achieving all sorts of other amazing results.  For example, just a few months ago CERN successfully isolated antimatter for 1,000 seconds.  This latest discovery, however, is even more world shattering and could open up the doors to new, never dreamed of technologies; because, anything that travels faster than light can hypothetically break the time barrier.

The researchers responsible for the find are now seeking peer review of their data before officially claiming that the discovery is true.  “The feeling that most people have is this can’t be right, this can’t be real,” said CERN spokesman James Gillies.

The neutrino beam in question was clocked traveling 60 nanoseconds faster than the speed of light, and scientists only put the margin of error at 10 nanoseconds.

There are fringe theoretical physicists that have stirred up controversy in the scientific community with out-of-the-box theories that would lend to the CERN revelation.  Nassim Haramein shook up the physics world a few years ago when he published a paper with a radically different theory of quantum physics.  He argues that at the subatomic level, protons actually behave as black holes, rather than particles.  He calls this the Schwarzchild Proton theory.  His model reveals that the strength of the strong force is due to the fact that protons are microscopic black holes with intense gravitational pull.  Similar to how the planets and stars in our galaxy revolve around a massive central black hole, so too do the electrons and other quantum particles seen at the subatomic level.  Haramein essentially argues that the Higgs boson particle doesn’t exist.  Oddly, CERN researchers have even gone on record stating that the Higgs boson may indeed not exist as their tests seem to be no closer to finding the mysterious particle.  While Haramein’s theories have been shunned by the mainstream physics community, the new findings coming out of CERN are revealing that what we know about the physical nature of reality may need to be edited, and fringe researchers like Haramein may turn out to be right after all.