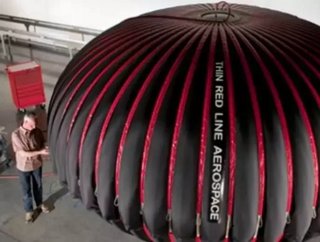 One of the biggest problems facing renewable energy like wind power is its inability to store energy. Giant battery units are needed to hold the power...

One of the biggest problems facing renewable energy like wind power is its inability to store energy.  Giant battery units are needed to hold the power created, otherwise the energy must be fed directly into the grid.  This can create irregularities in energy generation during low wind periods, and developers continue to seek out low cost alternatives to store the energy created.  One novel approach is the use of compressed air.  The wind turbines can power air compressors to fill tanks, then the high-pressure air can be released to run generators for electricity.

The process is conceptually straight forward: Wind turbines fill the balloon-like underwater bags with compressed air that later drives electrical generators on demand. While initial application is ideally linked to floating wind turbines, excess electricity from the grid—or from clean energy sources such as tidal and wave power—can also be used to drive compressors to fill the energy bags. The technology is especially suited to countries with relatively deep waters near their coasts.

Unlike on-ground compressed air storage units, which must be made of high-strength materials like carbon fiber to bear the high-pressure required to sufficiently generate energy on demand, the Energy Bag uses the naturally occurring pressure in deep sea conditions to contain the compressed air in a modified balloon design.

The Energy Bag itself weighs only 165 pounds (75 kilograms), but is able to displace 40 tons of sea water when placed at 2,000 feet (600 meters) below the water’s surface.  At this depth, pressures are around 70 times greater than the atmospheric pressure above water.  Just one Energy Bag can store approximately 70 MW hours of energy, or the equivalent of 14 hours of energy generation from the largest offshore wind turbine models.

The Energy Bag is expected to cost far below what an equivalent battery storage system would.  However, not all deep sea locations are suitable for the technology, since the locale needs to be close enough to land to feed the air via tubing to a land-based generator.  Europe - with numerous suitable offshore locations - has been identified as the first likely market to implement the Energy Bags, and Thin Red Line Aerospace has its eyes particularly set on the up-and-coming floating wind turbine farms that are being developed to tap deep sea wind power.