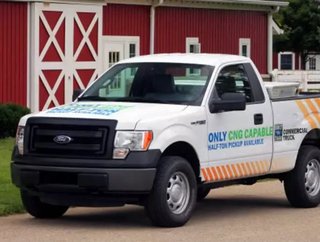 Driving a truck usually means frequent stops at the gas pump, but thats about to change. Ford Motor Co. recently announced that it will offer the 2014...

Driving a truck usually means frequent stops at the gas pump, but that’s about to change.

Ford Motor Co. recently announced that it will offer the 2014 F-150 truck with the ability to run on compressed natural gas, making it the only manufacturer with an available CNG/LPG-capable half-ton pickup.

The 2014 F-150 with 3.7-liter V6 engine will be available this fall with a factory-installed, gaseous-fuel prep package that includes hardened valves, valve seats, pistons and rings so it can operate on either natural gas or gasoline through separate fuel systems.

“Businesses and fleet customers have been asking Ford to make F-150 available with CNG capability to take advantage of the fuel’s low price and clean emissions,” said Jon Coleman, Ford fleet sustainability and technology manager. “With the money saved using CNG, customers could start to see payback on their investment in as little as 24 to 36 months.”

Another benefit of this alternative fuel: Cleaner emissions. The U.S. Environmental Protection Agency certifies CNG usage can result in up to 30 percent less greenhouse gas emissions.

When the 3.7-liter V6 F-150 is equipped with a CNG/LPG engine package, it is capable of achieving more than 750 miles on one tank of gas, depending on the tank size selected. The Ford F-150 averages 23 mpg on the highway.

CNG conversions can provide stability against fluctuating fuel prices as well as lower vehicle operating costs for fleet administrators. CNG sells for an average of $2.11 per gallon of gasoline equivalent, and is as low as $1 in some parts of the country, representing a significant savings over unleaded regular fuel. The national average for unleaded regular fuel is $3.66 per gallon.

In the next year, Ford will offer eight commercial vehicles with a gaseous-prep option, a number no other full-line manufacturer can match:

“We’re almost halfway to our company-wide goal of deploying 15,000 alternative-fuel vehicles by the end of year 2018,” said Jerome Webber, AT&T vice president, global fleet operations. “Vehicles such as CNG F-350s from Ford have helped us avoid purchasing 7.7 million gallons of gasoline over the past five years while reducing our fleet’s emissions.”

Compressed natural gas is mainly composed of methane. It is stored and distributed in hard containers at a pressure of approximately 3,600 psi. About 85 percent of the CNG used in the United States is produced domestically.