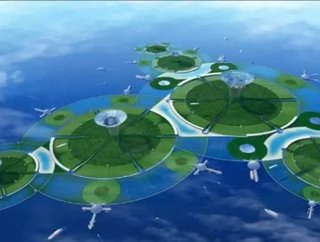 Japanese firm Shimizu has a startling new concept: mini floating, carbon-neutral cities that drift across the Pacific on giant water lilies. The Green...

Japanese firm Shimizu has a startling new concept: mini floating, carbon-neutral cities that drift across the Pacific on giant water lilies. The Green Float concept includes a number of cells that could house between 10,000 to 50,000 people.

The cells, each about 1 kilometer wide, could float freely or attach onto other cells to form larger towns, cities or even countries. At the center of each cell, a 1 kilometer high “City in the Sky” skyscraper would house the majority of residents, made from light alloys from the metal deriving from magnesium in sea water.

Grasslands and forests would be plentiful around each pod, essentially becoming self-sufficient in terms of food with farming and livestock throughout the 'plains.'

The creative concept Shimizu has dreamed up would potentially cut carbon emissions by 40 percent, scientists claim. Each cell would convert waste back into energy using the latest green technologies, and even collect islands of floating waste to harvest more energy.

Solar-Powered Car to Travel Around the World

Solar Cells Made From Plants?

Of course, the cities would have to float in waters guarded from extreme weather and tidal waves—ideally near the equator. Strong elastic membranes standing 30 feet above sea level would surround the cells to protect inhabitants from large waves. Sea walls as high as 100 feet could also be constructed, creating cities that are arguably more equipped to handle tsunamis than most coastal areas.

Too outlandish? Not according to Shimizu scientists, who are actually proposing to develop the first cells by as soon as 2025. They're not only working on the technologies to make it happen, but even thinking up new ways to collect solar energy on earth by encircling the moon with a belt of solar collectors.