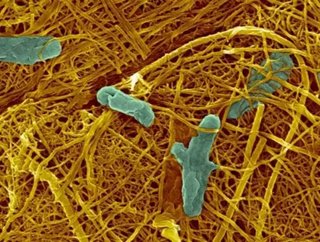 Bacteria are the most resilient life forms on this planet (and perhaps others), and researchers are discovering new bacterial strains that often defy o...

Bacteria are the most resilient life forms on this planet (and perhaps others), and researchers are discovering new bacterial strains that often defy our general understanding of how biological life can thrive.  Take for example, Shewanella, a bacteria that uses metal ions to live and grow in place of oxygen.  This bacteria sends out microscopic wires filled with various proteins to surrounding metallic elements, and an electron transfer process occurs.  The process is highly misunderstood, but essentially allows for the bacteria to live off of metal.

Shewanella can also transform metals and trap them within solid mineral deposits, and researchers from the University of East Anglia and Pacific Northwest National Laboratory are working to figure out how to utilize this bacteria’s unique ability in practical applications.  For instance, Shewanella’s metalworking abilities are already being considered as a way to prevent toxic metals from leaking into groundwater supplies.

More interesting, however, is the possibility of using Shewanella to grow microscopic conductive electrical wires for use in fuel cells and to expand the field of synthetic biology.  The university and national laboratory research team has isolated and determined the structure of one of the protein strains used by Shewanella to interact, manipulate, and live off of metal.

Researchers at the University of California, Riverside have gone as far as labeling the electrical wires extruded from Shewanella as “nanotubes,” which up until now have been chemically engineered in laboratory settings.  Biologically grown nanotubes that can carry an electrical charge may prove to be far cheaper to produce than their laboratory counterpart.  The process of organic nanotube manufacturing is also far more environmentally friendly than the toxic metals and chemicals used in chemical manufacturing of microscopic electronic conductors for computers and other devices.

The idea of biologically engineered energy is not science fiction, but is a very real possibility as advances—particularly in bacterial research—unfold.  Soon, we may be growing our power lines, and power stations will be running with the help of living organisms!