Masdar: The Greenest City in the World 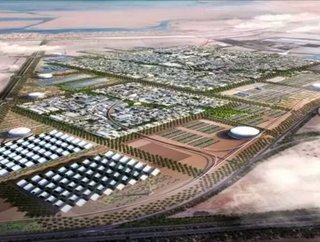 TO ENHANCE YOUR READING EXPERIENCE, CLICK HERE TO VIEW THIS ARTICLE IN OUR INTERACTIVE READER! Located 17 km from downtown Abu Dahbi in the United Ara...

Located 17 km from downtown Abu Dahbi in the United Arab Emirates (UAE), Masdar City rises from the desserts of the Middle East as a beacon for what cities of the future will look like. Set to act as the global hub for renewable energy and clean technologies, Masdar will offer people and businesses a live-work-play environment never seen before. Completely integrated energy, water, waste and transportation systems result in a city that recycles all of its waste, produces all of its own energy needs onsite, and is completely car-free (no pun intended).

Construction of Masdar City began in February 2008 under the management of CH2M Hill, and infrastructure development is being headed by the Al Jaber Group. Once completed in 2015, Masdar City is expected to offer accommodations to 50,000 residents and 1,500 businesses.

Masdar City aims to reduce energy consumption to maximize efficiency. This will be done through insulation techniques, low-energy lighting specifications, the optimization of natural light, the use of smart appliances and meters, and building management systems that interact with the overall smart grid of the city. Solar thermal and geothermal cooling techniques are also being implemented throughout the city to reduce the need for electrical air conditioning.

Masdar City already features a 10 MW, 50 percent thin film 50 percent polycrystalline, panel system built by Abu Dhabi’s own Enviromena on 22 hectares adjacent to the city. The solar power plant is the largest photovoltaic system in the Middle East. Solar panels are also to be featured atop the Masdar headquarters building and the Masdar Institute to supplement the energy needs of the central buildings of Masdar City.

Total water consumption will be reduced to a target 180 liters per person per day in the first phase of development with a final goal of 105 ltr/p/day. This is well below the 550 ltr/p/day average in Abu Dhabi. Water efficiency will be achieved through the incorporation of efficient fixtures, appliances, smart water meters, water tariffs, and highly efficient micro-irrigation to minimize evapotranspiration in the vegetation throughout the city.

The city’s water will be fed in through Abu Dhabi’s existing water infrastructure in the short-term, however, long-term plans are to recover rainwater and utilize desalinization technology to tap the water from the nearby Persian Gulf. All wastewater in Masdar city will be recycled through a bioreactor and used for landscaping and agriculture.

Masdar City plans to reduce waste by as much as possible through an easy-to-use recycling program implemented throughout the city. The waste is divided into three streams: dry recyclables (cans, bottles, paper); wet recyclables (food and organic waste); and residuals (any other trash that doesn’t fit the first two categories). These streams of recyclables will have easy-access depositories integrated into every building in Masdar, so recycling will become second nature. A fourth stream will collect hazardous materials such as batteries and medical waste. The waste streams will be collected and transported to recycling facilities, and wet organic waste will be composted for landscaping and agricultural use. The city plans to build a waste-to-energy plant in future phases of construction.

Bicycles and walking are expected to be the preferred mode of travel in Masdar City; however, some innovative transportation methods are being incorporated as well to add to the city’s futuristic appeal. Electric buses and an electric rail system will provide mass transit options throughout the city. Cars will be parked on the outer edges of the city and will not be permitted within.

But perhaps the coolest feature in Masdar City is the first wide-scale implementation of Personal Rapid Transit (PRT) and Freight Rapid Transit (FRT) systems. The systems will be all-electric personal transportation “pods” that will serve as single-cabin taxis to carry individuals or deliveries from one place to another all with just the touch of a button. Simply sit in the cabin, tell the PRT where you want to go, and you are automatically transported there, no steering necessary! This technology is being featured first in the Masdar Institute district of the city, but will be evaluated for expansion as technology advances.

In short, Masdar truly is the city of the future. And as the greenest city in the world, its life will be one of evolution. The city will continue to envelop the latest and greatest in renewable technologies as innovation breeds ever greater ways to harness energy, and provide even better livelihoods for its citizens, all while minimizing its impact on the surrounding environment. As Masdar Chairman Ahmed Ali Al Sagyeh says, “a new era is upon us, challenging us to venture beyond the achievements of the past and meet the needs of the future.” It is no coincidence that Masdar City looks like a microchip from above. Like the microchip, Masdar City will evolve, and its processing power will increase while its capabilities will become ever more intricate. The city is to serve as the headquarters for the International Renewable Energy Agency. Let’s see what kind of miracles Masdar will produce.