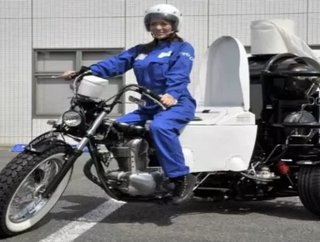 Japan's best known toilet maker, Toto Ltd., recently unveiled the world's first waste-powered vehicle. The three-wheeler motorcycle, with a toilet in place of a seat, can travel as far as 300 kilometers on a tank filled with excrements—don't worry, the “gas” isn't provided by the driver.

"The biogas it uses as fuel is not made from human waste. It's made from livestock waste and sewage," Kenji Fujita, a company spokesman, told reporters in a Tokyo suburb.

The 250cc engine is powered by fertilized, purified and compressed livestock waste and household wastewater. The organic material is transformed into biogas, which then powers the bike.

After three years of design and prototyping, Toto's ”Toilet Bike Neo” embraces the idea of using, you guessed it, poop as a renewable resource. Last year, the bike completed an 870 mile journey across Japan, but while the prototype is certainly grabbing everyone's attention, the company has no intention in commercializing the product.

"We hope to raise awareness among customers about our green campaign through development of environmentally-friendly products such as water-saving showerheads and water-saving toilets," Fujita added.