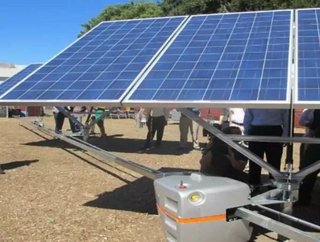 QTS provides the higher performance and energy output of dual-axis tracking at conventional single-axis tracking prices. QTS increases the energy production of ground-mounted solar power plants by up to 40 percent over existing fixed mount systems and lowers the Levelized Cost of Electricity (LCOE) by up to 20 percent. In addition, QTS offers fast installation, has low operations and maintenance costs, and is compatible with all solar panels and mounting foundations.

Solyndra Gets Low-Ball Offer from Seagate for Facility

This results in a better return on investment for project developers and investors, greater system reliability and performance for operators and owners, and solar energy that competes in price globally with conventional grid power for utilities and consumers. QTS is based on a new paradigm for power plant architecture and operation invented by QBotix: Solar Robotics™.

QBotix has raised $6.5 million in a Series A financing from New Enterprise Associates, Firelake Capital, Siemens Venture Capital, and DFJ JAIC. This brings the total amount of financing raised to date by the company to $7.5 million. The company is composed of solar industry veterans and robotics innovators from Silicon Valley, MIT, Caltech and Stanford.

Siemens Technology-To-Business, which helps bring new technologies to market, also announced that it has successfully finished its year-long qualification of QTS for deployment. The company deployed its first grid-connected system in October 2011, and has successfully demonstrated the ability to track both flat-plate and concentrating solar panels with high accuracy and reliability.

Solar tracking systems increase energy production by aiming solar modules toward the sun and tracking the sun as its relative position moves during the course of the day.

Conventional tracking systems tend to be expensive, unreliable, and complex to install and maintain. They are typically large structures requiring thousands of pounds of steel and concrete, and contain multiple failure prone controllers and motors to adjust their orientation.

QTS fundamentally re-invents the design of all solar tracking systems. QTS utilizes a pair of autonomous robots, one primary and one back-up, to control 300 kW of solar panels with high accuracy and reliability. The solar panels are installed on QBotix designed mounting systems that don't have any individual motors and are optimized for cost, strength, durability and installation simplicity. The robots travel on a track and adjust each mounting system to optimally face the sun in succession. Each robot replaces hundreds of individual motors and controllers found on conventional tracking systems. The embedded intelligence and data communication capabilities of each autonomous robot optimize power plant performance and enables detailed operational knowledge at an unprecedented level.

"Robots have proven themselves in extreme and diverse environments from the surface of Mars to battlefields and ocean depths. We're now deploying the innovations developed in robotics over the last several decades to manage solar power plants," said Wasiq Bokhari, CEO and founder of QBotix. "Our main focus is to deliver a compelling combination of high performance, reliability, competitive cost, and unprecedented intelligence to our customers. Regardless of the choice of solar panels, inverters, foundations or other system components, the use of QTS will dramatically lower LCOE compared to all existing mounting or tracking systems."